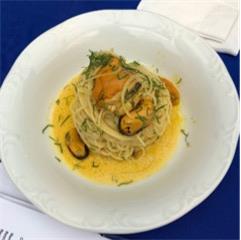 Italian pasta brand Barilla has launched a worldwide search for the next big culinary sensation culminating in the Pasta World Championship on October 24 – 25, 2018 in Milan, Italy. Now in its seventh year and just in time for World Pasta Day, the two-day pasta challenge will see 18 young chefs under the age of 35 compete before a Michelin-starred jury for the title of Master of Pasta.

Representing Canada is Angela Villalta who is currently a chef at Toronto-based L’Unita and Giulietta restaurants. After graduating from George Brown College, Villalta spent four months in Italy learning to cook under Alessandro Boglione at the Michelin-starred Al Castello Ristorante.

The 18 chefs will face each other during a single-elimination tournament. This year’s jury includes famed Italian chefs Lorenzo Cogo, Viviana Varese and Luigi Taglienti, chef nutritionist Holger Stromberg from Germany and U.S. food photographer and artist Brittany Wright. They will be judging presentation skills, creativity and cooking mastery during three heated rounds that will see the young chefs create proprietary signature dishes and reinterpret a true Italian classic, the beloved Spaghetti al Pomodoro.

“Barilla wants to support the next crop of talented chefs and inspire them to embrace the positivity and conviviality of the Italian lifestyle,” added Andrea Malservisi, Brand Equity and Communication Director, The Barilla Group. “The next Master of Pasta needs to come up with inventive and surprising pasta dishes that will ultimately elevate the standards of modern cuisine.”

On the first day of competition, Villalta will recreate a winning dish by Chef Angela.  In early June, Chef Angela competed against three other Toronto chefs in the Canadian Pasta World Championship semi-finals event, winning with her Capellini Pasta with P.E.I. Mussels, Sea Urchin and Lemon Zest dish, inspired by Canada’s wealth of fresh seafood.

The 2018 Pasta World Championship will be centered around the theme of “Eat Positive,” in an effort from Barilla to promote a joyful, balanced and nutritious way of eating with respect to quality ingredients and sustainability. Participating chefs will be asked to further that vision by creating signature dishes that inspire a positive way of eating and promote pasta consumption worldwide.