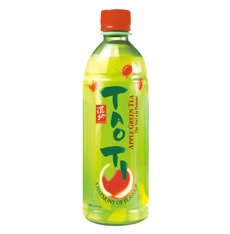 New Tao Ti Green Tea is made with Chinese green tea leaves, and according to manufacturer Telford International Co. Ltd., is made “with the ancient Chinese method of pan frying the tea leaves.” Low in sugar, high in antioxidants and containing no preservatives or artificial colouring, the iced tea is available in three flavours: Honey Green Tea, Lemon Green Tea and Apple Green Tea. The suggested retail price is $1.70 per 500-mL bottle, available in grocery stores throughout Vancouver and the Greater Toronto Area. For more information: matthew.fode@gcicanada.com

Here’s what our taste testers had to say:

Female, 30-something
“I’ve never been an iced tea drinker but was curious about this new drink, Tao Ti Apple Green Tea. I loved the idea that it incorporates green tea because of everything I’ve read about it. I do drink apple juice so this seemed like a great combination. It smelled wonderful. It had a very fresh, summery scent, and reminded me also of crisp apples and apple pie. As for the taste I couldn’t quite put my finger on it. It’s sweet, but there’s also a hint of bitterness, which I liked. And I liked that the green tea did not overpower the apple flavour. One whole bottle contains more sugar than I’d prefer, but then again I don’t think I’d drink 500 mL in one sitting. The bottle also doesn’t indicate how much caffeine is in it. I’m not sure if I’d buy it for myself, but I might for a party. I think this would be great mixed with alcohol.”

Female, early 40s
“I’m not sure that I like the packaging. The colour is attractive, but the design is a bit generic and probably wouldn’t stand out to me on a grocery shelf or merchandising cooler. I tried the Lemon Green Tea flavour, which was refreshing and only mildly lemony, which I prefer to iced tea that contains very strong lemon flavour. The fact that it contains no preservatives is also appealing. However, I found it very sweet, and so could only finish about half the bottle. In fact I had to drink a glass of water afterwards. As a result I probably wouldn’t buy this.”

Male, mid-40s
The Honey Green Tea is ensconced in a green plastic graphic sleeve instead of utilizing a label, so there was actually very little visually to suggest what exactly it is you are purchasing. Except that it’s green. The packaging attempts to capitalize on the ancient Chinese roots of the green tea beverage, complete with the fictitious but authentic sounding brand name drawn in broad calligraphy strokes and written vertically. While classical Chinese writing is written vertically top to bottom and from right to left, the manufacturers have chosen to ignore that fact when applying the English and French annotations of the flavour: Honey Green Tea/The Vert au Miel which is inexplicably read vertically from bottom to top in stark contrast to the way it has written the brand name.

While there is more than a hint of sweet honey, the Honey Green Tea does taste more like an authentic green tea, complete with the slight bitterness than anything I have ever tasted. Having lived in Japan for a few years, I would imbibe a minimum of three cups of green tea a day. Telford International in a nod towards the classic flavour of green tea have made it less about the commercial taste and utilized a more authentic bitter flavour that permeates the Japanese/Chinese green tea utilized in ceremonies.

While I might applaud them for going for a flavour that is definitely more classical, it may not be to everyone’s taste here in the Western world. For Telford’s sake, I hope I am wrong. Perhaps it’s my depraved Western upbringing, but I have a sweet tooth. And while Tao Ti’s Honey Green Tea possesses a decent enough authentic flavour, it’s just not quite my cup of tea.

Female, late-20s
If I saw this product – Tao Ti Apple Green Tea – in a store I wouldn’t buy it. At first glance the packaging seems excessive and doesn’t translate that it’s a healthy green tea beverage, plus “apple” as a flavour is often too tart. But to my surprise it was actually light and refreshing with a subtle apple flavour infused in an earthy cold tea. I also tried the Tao Ti Honey Green Tea. Honey and tea is a natural union of flavours and to finally have it in a cold tea beverage is brilliant. From first sip to last gulp this green tea is delicious and thrist-quenching. Unfortunately, the packaging is gaudy and the nutritional information is hard to read, which makes it a hard sell for first purchasers.

Female, 30-something
I really wanted to like Tao Ti Lemon Green Tea flavour ice tea. I love green tea, lemon, and ice tea and was hoping for the best of all these flavours. However, this was not “A Harmony of Flavour” for me, as the packaging suggests. To me, it tasted like I was drinking dishwashing liquid. I finally had to stop half way down the bottle after I gave it a fair go.