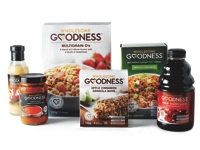 Wholesome Goodness is a new line of better-for-you products manufactured by Illinois-based Wholesome Goodness, LLC and available exclusively at Walmart Supercentres. According to the company, the line was created in response to the need for families to have access to nutritious foods that are priced below mainstream brands. The line includes more than 80 products in 16 categories, from snack foods, and hot and cold cereals, to salad dressings and pasta sauces. The line uses only natural ingredients and aims to lower or eliminate sodium, sugar and fats whenever possible. It also focuses on beneficial nutrients such as fibre and antioxidants. www.wholesome-goodness.com

Female, 33, marketing specialist
Multigrain O’s cereal. “I don’t often eat cereal, usually because I feel stuffed afterwards. This is pretty flavourful though. I like the fact that it’s multi-grain, high in fibre and low in sodium and sugar – something I feel ok giving my kids. I usually buy private-label cereals because of the higher price of national brands, so I would buy this. I wouldn’t go out of my way to go to Walmart for this though.”

Male, 48, sales manager
Roasted whole cashews. “The packaging was good. The label was clear and easy to read, and I like how the package stands up on its own, that it’s re-sealable and very sturdy. But the nuts themselves seem to have some sort of funny aftertaste that sneaks up on you, almost as if they’re stale (but according to the package they weren’t). I wasn’t that big on them.”

Female, 10
Multigrain O’s cereal. “This cereal is so good. It smells good, like Honey Nut Cheerios, and tastes like that too. I like this better than the cereal we have now. The package looks boring. It needs to be more colourful.”

Male, 60-something, retired school teacher
Tuxedo Snack Mix. “Salty and sweet! An awesome combination that had me constantly reaching for more. But is it good for you? Despite some creatively worded numbers on the nutritional facts label, the yogurt covered raisins, dark chocolate covered soy nuts and peanut mixture contained within a 227-g bag contains 1,180 calories. Keep in mind that the average daily caloric intake is 2,500 for men and 2,000 for women. Each bag contains 90.8 mg of salt (daily recommendations say no more than 2,400 mg) and 81,720 mg of sugar (though you shouldn’t exceed more than 40,000 mg daily – good luck with that). Yes, you should probably not eat the whole bag, but the mixture is so tasty you are going to. Overall: On a diet, stay away. Looking for a tasty fun food – by all means have a bag.”

Female, 30-something, teacher
Wholesome Goodness Yukon Snack Mix. “I love the packaging: resealable bag and some clear plastic so I can see the product inside. And I can snack on this for days, too. Once I open it up, it smells nutty and sweet. I love a sweet-savoury combination. There’s nothing greasy about the nuts, which is great. And it contains my three favourite: pecans, almonds and walnuts. The sodium count is fantastic for a prepared snack like this. I’m not a huge fan of anything that’s coated in yogurt, but the yogurt-covered cherries aren’t bad. They’re just sweeter than I would like. I’d buy these.”

Female, 10
Sour lemon raisins. “Oh these are so good! It doesn’t taste too sour and it’s really lemony.”

Male, 39, logistics provider
Organic soy drink, vanilla. “I drink a lot of soy milk, and actually prefer the flavoured varieties out there. It was, therefore, with some excitement that I tried the vanilla version of Wholesome Goodness’ organic soy drink. I’ve had the flavour before, and knew what I should expect. Trying this brand, I was shocked. There was very little actual vanilla flavour. What little flavour there was was hardly vanilla. It tasted close to orange. At 100 calories, the drink is similar to other brands. The graphics on the packaging were nice, though subdued. However, when I tried to open the inner tab of the container, it broke in my hand, and I was forced to have to find something to pierce it. Overall, I was disappointed. Would I purchase this product? No.”

Female, 33, marketing specialist
Sour lemon raisins. “These are slightly tart tasting, but not too bad. I do like the packaging though, especially that it can be resealed. The label colour and the clear packaging give it an attractive appearance. It seems like a healthy snack for anyone in the family. I could see using these in recipes as well.”

Male, 40-something, sales director
Yogurt covered dried tart cherries. “The yogurt coating is rather bland and waxy. It’s coated a little to thickly for my liking and has more of an off brand white chocolate taste to it rather than yogurt. The real flavour is in the cherries which are tart, sweet almost semi-dried and nice and plump. It’s actually worth chewing through the blah coating to get to the cherries. The product labelling is almost as bland as the yogurt coating and screams Walmart. The ingredients seem to be reasonably natural or at least pronounceable, which is reassuring. The packaging is plastic and foil and re-sealable which is convenient. I would not expect to eat all 142 g in one sitting. Worth the value price that Walmart is likely charging for this considering dried cherry snacks are hard to find elsewhere and are usually priced at a premium.”

Male, 48, sales manager
Sour lemon raisins. “Same comments as above about the package. I enjoyed the flavour of these, very fresh and lemony tasting.”

Female, 30-something, teacher
Wholesome Goodness Rice, Wheat & Strawberries. “I’m not sure how I felt about this cereal. The flakes smell fruity and are crunchy on their own. I could snack on them – that’s how appetizing they are. But they appear to be coated with something, which looks like sugar or icing. And that put me off. Also, I found that once I added in the milk, the flakes turned soggy fairly quickly. I prefer it when the flakes retain some crispiness. The freeze-dried strawberries were pretty good. They seemed to look more ‘real’ once the milk was added in. Overall I found the cereal a bit too sweet tasting. I did like the packaging. The image and colours on the box match the message of the Wholesome Goodness brand.”

Male, 23, student
Wholesome Goodness Yukon Snack Mix. “I opened these up and couldn’t stop eating them. I can’t believe it’s good for me. My only complaint is the cranberries.”