Purple tomatoes from the U.K. are grown in Canada for further research

Scientists in the U.K. have developed a purple tomato with added health benefits; it’s being grown and harvested in Ontario 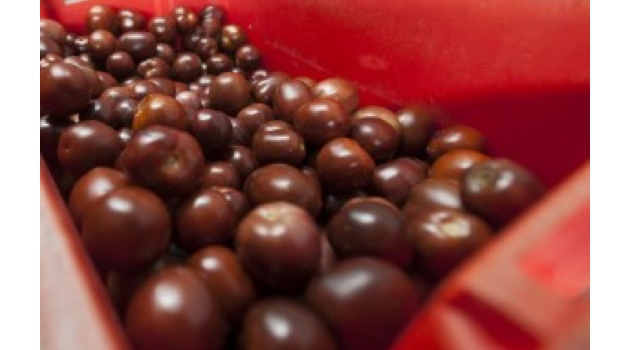 Norwich, U.K. – Scientists in the U.K. have developed a special kind of tomato that is being grown and harvested in Leamington, Ont.

The scientists, from the John Innes Centre in Norwich, explain that the tomatoes have a deep purple colour, which is a result of high levels of anthocyanins – the same compounds normally found in blueberries, blackberries and other deeply coloured berries.

And the tomatoes have double the shelf life.

In Leamington, Ont. it’s New Energy Farms that is growing the tomatoes in its 5,000 sq.-ft. glasshouse, which will yield enough tomatoes to produce 2,000 litres of purple tomato juice.

The tomatoes and juice can be used to study the effects of a high-anthocyanin diet on cancer, cardiovascular disease and other chronic diseases.

The scientists say bringing the juice to the food market will require regulatory approval and, in North America, may be possible in as little as two years.

Dean Tiessen, the owner of New Energy Farms, spearheaded the research collaboration. He passed away last December, but his family and business partners are continuing the work.

The John Innes Centre in Norwich is an independent, international centre with a focus on plant science and microbiology. The centre’s research aims to benefit agriculture, the environment, human health and well-being, and engage with policy makers and the public.

So far this research has been funded by the E.U. and through the John Innes Centre’s strategic funding from the Biotechnology and Biological Sciences Research Council. With Professor Jonathan Jones from The Sainsbury Laboratory, Professor Cathie Martin has formed the U.K.’s first GM crop spin-out company, Norfolk Plant Sciences, to explore the commercial potential of plants with increased levels of health-giving compounds.