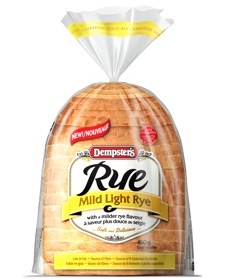 The new rye breads are soft and moist and are packaged in a smaller convenient loaf size to minimize waste.

The breads are also low in fat, a source of fibre and a source of eight essential nutrients.

The company says the breads are made to have an authentic deli taste and come with a Taste Guarantee to ensure freshness and flavour.

The breads are available at major grocery stores across Ontario in the deli aisle (where one exists) at a suggested retail price of $2.99.

The mixes feature a coarse blend of fresh authentic spices and herbs that are easy to see in the package thanks to a redesign of the company’s packaging that includes a clear window on the stand-up pouch. All the spices contain no trans fat, no artificial colours or flavours, and no added MSG.

The company says the results of an IPSOS consumer concept screening conducted in December 2009 for the Club House Flavourful Recipe Mix products found a strong “purchase intent.” Sixty-one per cent of consumers stated they would definitely or probably buy, which the company says is higher than the IPSOS food norm of 42 per cent. The mix pack comes just in time for holiday entertaining and retails for $8.95. It’s found in LCBO stores across Ontario.

The company says the line was created in response to the need for families to have access to better-for-you foods that are priced below mainstream brands. The line includes everything from snack foods, hot and cold cereals, to salad dressings and pasta sauces. Walmart is offering up to 80 SKUs.

The line only uses natural ingredients and aims to lower or eliminate sodium, sugar and fats whenever possible. It also focuses on beneficial nutrients such as fibre and antioxidants.

With the Keurig Single-Cup Brewing System, consumers can choose a variety of coffees, teas or hot cocoa in K-Cup portion packs. There are three brands and six varieties of K-Cups now available and coming in early 2011. My Vitality and My Waistline are found in health stores across Canada for $5.99 for a three-tube pack or $24.99 for a 14-tube pack. The aim of the products is to help Canadians prepare simple meals while adding a little creativity and spice to them.

The new sauces also coincide with the launch of an Angus Reid Public Opinion survey commissioned by VH Sauces and the premiere of a VH-sponsored online series called Life Unjarred.

Both sauces are available in all major grocery chains and have a suggested retail price of $3.49.