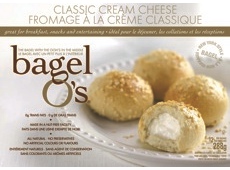 Bagel O’s
• Tastefully Yours Bakers in Toronto has launched Bagel O’s, a convenient and quick side dish or snack. The frozen bite-size Bagel O’s have all the yummy taste and texture of traditional golden bagels with whipped cream cheese.

Once thawed consumers can enjoy the bagels right out of the refrigerator or heat them in the toaster or microwave. The company says the bagels last up to a year in the freezer or a week in the fridge.

For consumers looking for a healthy snack, Bagel O’s are better for them than the average bagel with cream cheese. They’re low in fat, have no trans fats or preservatives and have only 70 calories each. They’re also kosher, and boiled, baked and prepared in nut-free facilities.

The company is marketing Bagel O’s as a quick, easy and healthy option for breakfast for consumers who are often rushed. Or they make a healthy option for lunch as a side to a salad or during that afternoon slump they’re an alternative to sweets.

Bagel O’s retail for $1.49 for a sleeve of three or $3.99 for a package of 12. They come in different flavours such as smoked salmon, whole wheat with herb and garlic, blueberry and classic cream cheese. The company announced in September that most Liquor Control Board of Ontario (LCBO) outlets across Ontario were selling the colourful lime green six-packs in time for the Labour Day weekend.

The company had launched Moosehead Light Lime in Moncton, N.B. in June and has sold more than 1.5 million bottles.

The company says the new beer spawned a slew of e-mail messages from consumers in Ontario, asking when they would be able to purchase it.

Moosehead says it has a brand-exclusive agreement with the LCBO to list Moosehead Light Lime for the next 12 months. It sells for $12.25 for a six-pack and $22.95 for 12 bottles. The company says the new packaging is more distinctive and the new flavours are even creamier. The over-run, the amount of air in the product that results in its density, has been reduced to among the best in the industry, enhancing the taste.

The new line is available at Loblaw’s, Highland Farms and Whole Foods Markets and some independent retailers. Pricing ranges from $5.99 to $7.49. The four fruit combinations are:

Each 260-mL jar contains one pound of premium organic fruit. The spreads are certified organic and are sweetened with IBD EcoSocial certified fair trade sugar and contain one-third less sugar than jam.

The spreads also contain antioxidants equivalent to the amount found in a cup of blueberries. They also contain 40 per cent fewer calories per serving than standardized jams.

Superfruit Spreads are found at major retailers and natural food stores across Canada, and have a suggested retail price of $5.49.