Grab-and-go is among the most closely watched and competitive food industry sectors in Canada today. Behind the boom is the country’s ever-growing population of time-starved consumers. An added impetus, according to the NPD Group, Inc., a research and consulting company based in North York, Ont., is the current economic downturn, which, shows NPD research, has “contributed to slowed growth of lunch at restaurants.”

Ready-to-eat sandwiches, soups and salads are among the most preferred grab-and-go items at lunch. But these quick, hand-held foods have also become a consumer staple at snack times and evening meal times, prompting retailers – from coffee shops and quick-serve restaurants to grocery chains and convenience stores – to stock them throughout the day. For instance, says Susan Jones, head of Product Development at Mississauga, Ont.-based The Second Cup Ltd., “While some markets like Montreal have had sandwiches for some time, Second Cup introduced sandwiches across the network about a year ago to satisfy our guests who were looking to come to Second Cup beyond the morning day part.”

NPD data agrees: “Sandwiches have seen growth at the snack occasion. The emergence of sandwiches and other foods normally associated with a specific meal…suggests consumers are looking for more substantial snack foods.”

In putting together their sandwich selection for that meal or substantial snack, retailers are conscious that today’s consumers want healthy ingredients, different tastes and great quality – and that they’re willing to pay a premium to have them. For food producers, this emerging sandwich market also offers a unique new revenue source. But there are several issues that have to be considered before leaping into the sandwich market. For one thing, not just anything will do for today’s on-the-go crowd, especially in urban areas. In fact, it’s getting more and more difficult to find a plain bread sandwich with one of the traditional stand-bys such as egg salad or ham and cheese. It’s much more likely to see “sandwiches” featuring multigrain, focaccia or other types of specialty baked goods such as pitas, bagels, wraps and paninis.

Sandwich fillings now range from mildly different to highly sophisticated, with complex and adventurous flavours and upscale ingredients – think prawns and spinach, imported cheese and meats – often with an ethnic basis or twist, such as curried egg salad with sunflower seeds. Karen Boughton, director of Deli/Home Meal Replacement at B.C.’s Thrifty Foods, says “Consumers certainly are more health conscious, but they also want a higher-end product and unique offerings.” Sales of the grocery retailer’s ready-to-eat items are up 10 per cent this year over last. 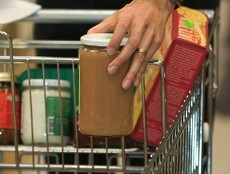