Canadians may be wasting 13.5% more food at home since start of pandemic 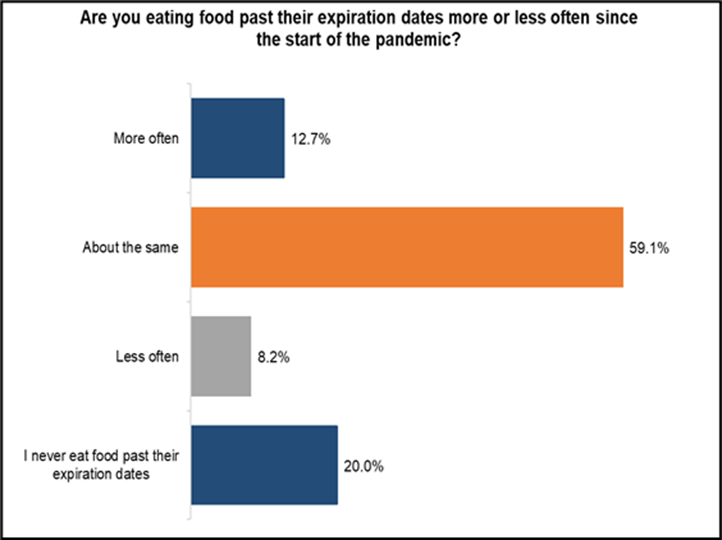 “Since most of our lives have changed and most Canadians have been spending more time at home since March, many are wondering if Canadians are generating food waste at home. The present investigation on home organic food waste looks at how much Canadians may be wasting food compared to before the pandemic. We also look at COVID-related and other factors which could lead to more food waste at home. In partnership with Caddle, a total of 8,272 Canadians was surveyed between August 21-23, 2020.

Results of this survey must be considered with some caution. The pandemic brought a lot of uncertainty to most Canadians over the last 6 months. This massive change likely triggered different home-based behaviour patterns. Spending more time at home obviously caused households to consume food differently.

Self-reporting results suggest Canadians may be wasting more food since the start of the pandemic. Before the pandemic, and based estimates, respondents conveyed that their household was generating about 2.03 kg per week of organic food waste (avoidable and unavoidable). This number is below the numbers we can find in most food waste studies, but the present report wanted to look at differences between pre-COVID and current perceptions. Our survey suggests that the average Canadian household is now generating 2.30 kg of organic food waste (avoidable and unavoidable), which is an increase of 13.5%. This is consistent with some early data released by some municipalities in the country. Based on our modeling evaluations, Canadian households could potentially be generating between 20 to 24 million kilos of additional organic waste a month, since the start of the pandemic. According to a recent study on domestic food waste, about 2.16 billion kilos of food, or more than $20 billion worth, is lost. This equals an annual cost of avoidable food loss and waste in Canada equaling $1,766 per household. With COVID-19, costs may have increased by $238 per household, or $2.95 billion for the entire country.

Nonetheless, it is not clear whether households are generating more waste than before the pandemic, proportionally, given that Canadians are eating more often at home. A total of 55.4% of respondents believe they are wasting less food in percentage of volume, compared to before the pandemic.

Reasons why food is wasted vary greatly. Respondents were asked to state reasons why food is wasted in their household since the start of the pandemic. The most selected reason was “food is left in the fridge or freezer too long” (31.3%), which is likely indicative of poor planning behaviours. In fact, poor planning is at the root at most of the responses. “Not consuming food before the best before or use by dates” (15.0%), “Preferring the freshest possible food” (12.8%) and other reasons are all issues that could be addressed by planning and behaving accordingly when shopping for and cooking food. The second most popular choice over all was that “household members did not finish their meals” (30.4%), except in Quebec it was in fact the most popular choice (26.9%). Interestingly, 17.2% of households believe they never food waste, which is a far higher percentage than what past studies have assessed.

In our survey, we also asked whether respondents threw away food believing it was contaminated by COVID-19, which would in turn generate more waste. While a total of 10% of Canadians reported to have thrown away food which they believed was contaminated with COVID-19, Quebec had the highest percentage (14%), followed by British Columbia (13%).

Finally, we asked if respondents have bought more food to give to a food bank or community organization since the start of the pandemic. This was mainly to assess how people considered helping food banks as a priority, while buying more food than they needed. A total of 17% of respondents said to have purchased and given food to food banks. The highest level is in Ontario (20%), and the lowest, Prince Edward Island (7%).