In celebration of National Cereal Day (March 7), a recent survey by Kellogg Canada Inc. reveals that Canadians continue to think outside-the-cereal-box when it comes to their cereal creations. Experimenters of flavour and embracers of the unconventional, nearly 90 per cent of Canadians continue to be cereal eaters, and approximately one-in-four Canadians eat cereal more than three times per week.

This year’s cereal survey served up spoonfuls of cereal surprises:

“If there’s one thing we’ve learned from this year’s National Cereal Day survey, it’s that we continue to be a nation of cereal lovers. Whether challenging traditional flavour profiles, customizing our bowls to meet individual taste preferences, or simply enjoying cereal as an anytime snack, Canadians’ love of cereal is undeniable,” says Lores Tomé, director, Communications and Corporate Affairs, Kellogg Canada Inc.

Canadians aren’t afraid to challenge their palette when it comes to their cereal consumption:

From coast-to-coast, Canadians have a soft spot for cereal – we never want it left on its own: 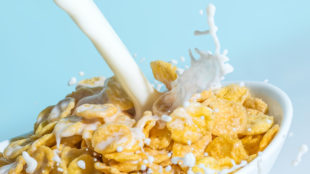 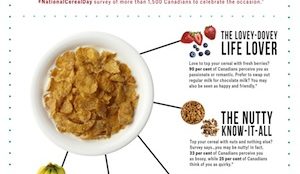 What does your cereal say about you?