Threads of Life educating workplaces about occupational health and safety

MISSISSAUGA―Kevin Bonnis hasn’t worked the shop floor since 2003―the year he got caught in a paper baling machine that sliced off his feet.

He was 32 at the time and working as an industrial millwright in Ontario.

“I asked the operator of the machine if the power was shut off and he said yes.”

“The machine cycled, amputating both my feet by about 90 per cent.”

Bonnis was trapped for an hour and a half as firefighters tried to free him. It took two teams of surgeons and nearly nine hours to re-attach his feet.

He hasn’t worked on a machine since the incident. But that hasn’t kept him from visiting industrial facilities across the country, where he tells his story to other plant workers in order to prevent similar events.

Bonnis is one of 260,284 workers hurt on the job each year in Canada, according to the most recent count of time-loss injuries from the Association of Workers’ Compensation Boards of Canada. At least another 900 die from work-related incidents.

More recently, Bonnis also joined the hundreds of Canadians who work with Threads of Life, a national charitable organization that provides support for the families of workers who have been injured or killed on the job.

“With workplace fatalities, it’s always sudden. Families not only find themselves having to deal with an unexpected tragedy but often they get wrapped up in the whole legal process that can follow,” she says.

It can take up to two years for an Ontario Ministry of Labour investigation.

“If there’s a fine or other legal fallout, it can take another three to four years before the case is completely finished. Throughout this, they’re often reliving the incident. ”

The organization helps families understand and cope with the legal process. It also provides financial-related assistance.

“If the breadwinner dies or is injured on the job, that can cause added stress,” she says.

Threads of Life organizes educational talks at workplaces, where victims or their surviving families, tell their stories.

“It’s an effective tool to reinforce health and safety. Having someone get up and talk about what happened to them grabs the attention of employees and allows them to make a personal connection.”

To coincide with the North American Occupational Safety and Health week, the organization is having a charity walk in Mississauga, Ont. on May 1.

Now 40, he’s returned to school, where he’s studying human resources with a specialization in health and safety.

“Ironically, I’d always been interested in health and safety around the plant before my accident and now studying it seems the natural way to go. What I’ve gone through has increased my passion tenfold.” 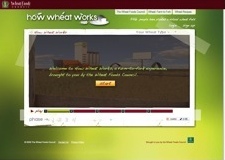