Starting this Aug. 21, the meat industry will label beef products that have been mechanically tenderized and added cooking instructions will help keep consumers safe 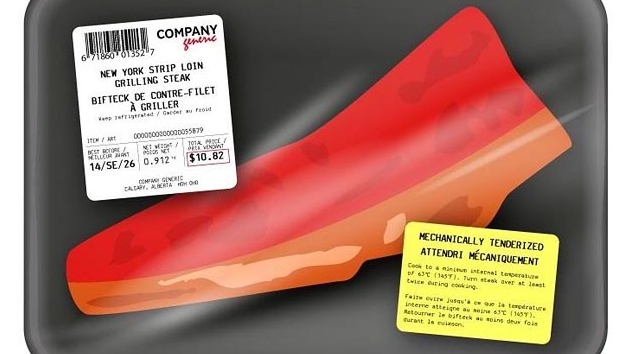 Ottawa – Starting this Aug. 21, Canadian consumers will know right away if the beef they purchase has been mechanically tenderized.

That year, 18 cases of foodborne illness caused by E. coli O157 were reported as part of the outbreak associated with contaminated beef, says Health Canada.

During the food safety investigation following the outbreak, five cases were considered to be likely associated with the consumption of beef that had been mechanically tenderized at retail level.

Food processors, foodservice and retailers mechanically tenderize meat to improve the tenderness and flavour of beef. The process involves using needles or blades to break down, penetrate or pierce tougher cuts of beef. The process disrupts the muscle fibres and also allows users to inject the meat with a marinade or a tenderizing solution.

It’s not always clear just by looking at the meat product that it’s been tenderized. Mechanical tenderization can also occur at home, as tenderizing tools are available to consumers, adds Health Canada.

In general, how well done a steak is, isn’t usually a significant concern. This is because harmful bacteria that may be present would normally be on the surface of the meat and would be inactivated during cooking, explains Health Canada.

However, when steaks and beef cuts are mechanically tenderized, there is a potential for bacteria to be transferred from the surface to the centre of the meat. Therefore, there may be an increased risk to consumers from MTB.

Health Canada says it completed a health risk assessment specifically focused on E. coli O157 in MTB in May 2013.

The results of the assessment showed a five-fold increase in risk from MTB products when compared to intact cuts of beef.

The assessment also noted that without labels, it is difficult for Canadians to identify which beef products have been mechanically tenderized.

Health Canada now requires the following statements (as shown exactly in quotations) to be included on the principal display panel:

a) Identification as “mechanically tenderized”

c) And, in the case of steaks, an additional safe cooking instruction to help achieve a consistent temperature throughout “Turn steak over at least twice during cooking.”