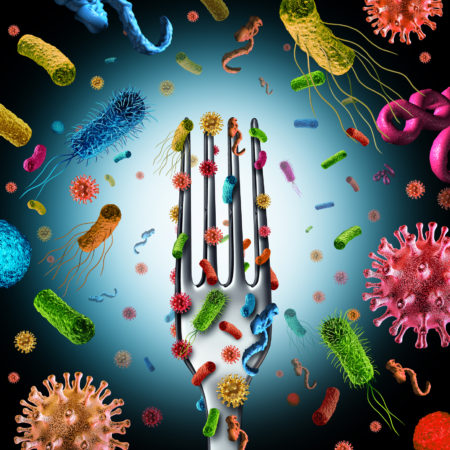 Bacteria and germs on food as a cutlery fork with dangerous cells on the surface as salmonella listeria causing poisoning and illness as a health and medical symbol as a 3D illustration.

People who retain a particular bacterium in their gut after a food poisoning incident might be more susceptible to developing Crohn’s disease later in life, according to a new study led by researchers at Hamilton, ont.’s McMaster University.

The researchers used a mouse model of Crohn’s disease to discover that acute infectious gastroenteritis caused by common food-poisoning bacteria accelerates the growth of adherent-invasive E. coli (AIEC), which is a bacterium that has been linked to the development of Crohn’s.

According to a media release from McMaster, even after the mice had eliminated the food-poisoning bacteria, researchers still observed higher levels of AIEC in the gut, leading to worsened symptoms over a long period of time.

Crohn’s disease is a debilitating bowel disease characterized by intestinal inflammation. One in every 150 Canadians is currently living with Crohn’s or colitis.

Coombes says the study’s results mean that new diagnostic tools should be developed to identify AIEC-colonized individuals who may be at greater risk for Crohn’s disease following an episode of acute infectious gastroenteritis. “We need to understand the root origins of this disease,” he says, “and to use this information to invigorate a new pipeline of treatments and preventions. It has never been more pressing.”

The study was published in the journal PLOS Pathogens. It was funded by grants from the Canadian Institutes of Health Research and Crohn’s and Colitis Canada.