Beer Connected to Psoriasis in Women 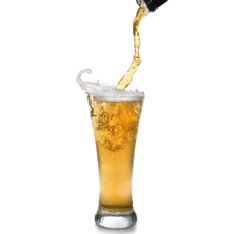 A new study suggests that women who drink regular beer have a greater risk of developing psoriasis, an immune-mediated skin disease. According to the research, the same results are not true for women who drink light beer, wine or other types of alcohol.

“Non-light beer was the only alcoholic beverage that increased the risk for psoriasis, suggesting that certain non-alcoholic components of beer, which are not found in wine or liquor, may play an important role in new-onset psoriasis,” say researchers from Brigham and Women’s Hospital and Harvard Medical School in Boston.

Researchers pointed to starches containing gluten as a possible cause. “One of these components may be the starch source used in making beer. Beer is one of the few non-distilled alcoholic beverages that uses a starch source for fermentation, which is commonly barley.” They noted that brewers use lower amounts of grains to make light beer, potentially explaining why there was not the same connection between light beer and psoriasis.

The study will appear in the December issue of Archives of Dermatology.