Windsor, Ont.’s Lot No. 40 named Canadian Whisky of the Year

At the sixth annual Canadian Whisky Awards in Victoria, B.C., Lot No. 40 won the top honour 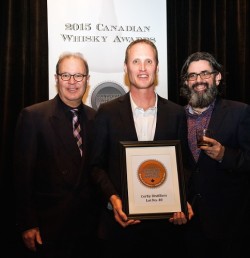 Lot No. 40, a whisky distilled in Windsor, Ont., was named the best Canadian whisky of 2015 at the sixth annual Canadian Whisky Awards.

A panel of 10 independent whisky experts named Lot No. 40 the Canadian Whisky of the Year, announcing the results of the annual blind tasting competition on Jan. 14, 2016, at the Victoria Whisky Festival in Victoria, B.C.

Davin de Kergommeaux, chairman of the judging panel, described Lot No. 40 as “a rye whisky sensation. Interest in rye is surging globally and here is proof that Canada makes the best all-rye whiskies in the world.”

The list of all the winners can be viewed at http://www.canadianwhisky.org