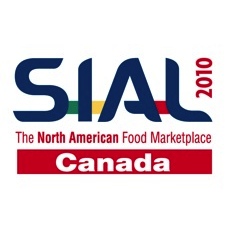 For 2010, SIAL Montreal becomes SIAL Canada confirming its place as the leader of international trade shows in Canada. The name change was also made to reaffirm participation of exhibitors and attendees from across Canada and to strengthen the show’s image abroad. SIAL Canada 2010 will highlight fair trade, kosher, halal, organic and foodservice exhibitors with special logos on their booths and on show maps.

SIAL Canada 2010 will also have numerous special events and workshops, including:

• SIAL Cuisine, which will run each day of the show with chefs cooking up the latest recipes using food and equipment from exhibitors

• the fourth annual Olive d’Or contest, which is the most important international extra virgin olive oil contest in North America and will include an exhibit area as well as olive oil testing in the heart of the International Sector.

The show will also include Expert Pathways and the Nutrition Agora. And
SIAL will again be co-located with SET Canada, the only food equipment show for the retail and foodservice industries.

As for visitors, in 2009 more than 12,000 visitors attended the show. The visitor profile breaks down as follows:

The show’s partners include: