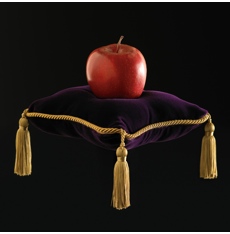 The Red Prince is a new premium apple, grown exclusively in Canada by Thornbury, Ont. growers Marius and Irma Botden. The apple, which reaches its prime during winter, features antioxidant-rich red skin, the sweetness and juiciness of a Golden Delicious apple, and the crispness and tanginess of the Jonathan apple. According to its growers, its perfect for eating fresh, in salads or in baking, and goes well with sharp Cheddars and blue cheeses.

This apple is already hitting the Ontario market this month at Sobeys, Longo’s and select Loblaw stores, allowing consumers to choose local apples at a time when other varieities are traditionally unavailable.

Taking a bite out of bad manners

FCC is also aligning the Red Prince brand with a civility movement focused on “the return of etiquette and manners to society, qualities associated with royalty.” To encourage acts of kindness and social manners, as well as consumption of the apple, the company is launching a 30-day civility challenge. Fans can follow the challenge on Twitter @RedPrinceApple, or connect with the Red Prince on Facebook.