Re-use is not always the better alternative 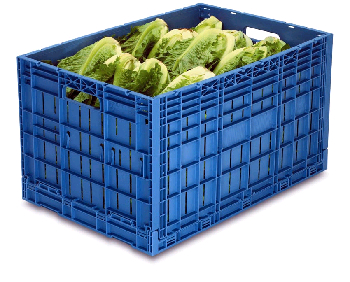 A year ago, a food safety expert at the University of Guelph claimed that using reusable plastic crates (RPCs) to ship food in Canada was “a recipe for disaster.” The claim made headlines even as Dr. Keith Warriner freely acknowledged that the data he used to derive his conclusion came from a small sample size. Now, after completing a second, more robust study, he’s sticking to his guns.

In his latest sampling of new and supposedly clean RPCs delivered to growers’ farms in Ontario and Quebec, Warriner found a high proportion of crates to be in poor sanitary condition, even worse than in last year’s study. Of particular concern was the high prevalence of food safety indicators, especially E. coli on 13 per cent of the crates tested. While most strains of E. coli are harmless, some strains can make people sick, causing severe stomach cramps, diarrhea and vomiting. Serious complications of an E. coli 0157:H7 infection can include kidney failure. The key is the risk factor.

Almost half (43 per cent) of the crates arriving at the growers’ farms failed basic sanitary standards; 73 per cent exceeded bacteria loading levels; and 51 per cent and 35 per cent failed tests for enterobacteriacea and coliform respectively. The results also showed a clear geographical split between Ontario and Quebec, suggesting that the RPCs tested in Quebec had probably been given a quick hose down in Quebec and then simply transferred from farm to retailer and then on to another farm, rather than being shipped to the closest RPC wash facility, which is what is meant to happen in a re-use system. About 10 per cent of the crates were visibly dusty or contained dried plant material, and 30 per cent still had the previous label attached.

Plastic crate operator IFCO claims that its washing process “destroys 99.5 per cent of bacteria” and that “RPCs are washed, sanitised and air-dried between every issue, without fail.” This may be true, but clearly the whole re-use cycle is failing to deliver sanitary crates for further use. Bacteria such as E.coli was present in the latest test round, and Loblaws, as the major promoter of reusable crates for produce in Canada, should be very concerned.

Canadian consumers should be concerned too. What exactly are the microbiological testing standards being applied to the RPCs being used in Canada? What’s a pass and what’s a fail? And how is it, if the RPCs are being decontaminated in a washing plant, that the residual bacteria counts being reported are so high? And who exactly is tracking whether the crates sent to Canada are actually being shipped back to the U.S. for washing, or whether they are just being hosed down locally and taking a short cut to the next farm?

For the full report see Microbiological Standards for Reusable Plastic Containers within Produce Grower Facilities within Ontario and Quebec, Dr. Keith Warriner, University of Guelph. Both studies were commissioned by the Canadian Corrugated and Containerboard Association (CCCA), which PPEC represents on environmental issues. To protect the growers’ commercial interests, only the author knows the farm locations used in the tests.

John Mullinder is the executive director of the Paper & Paperboard Packaging Environmental Council (PPEC). Contact him at jmullinder@ppec-paper.com