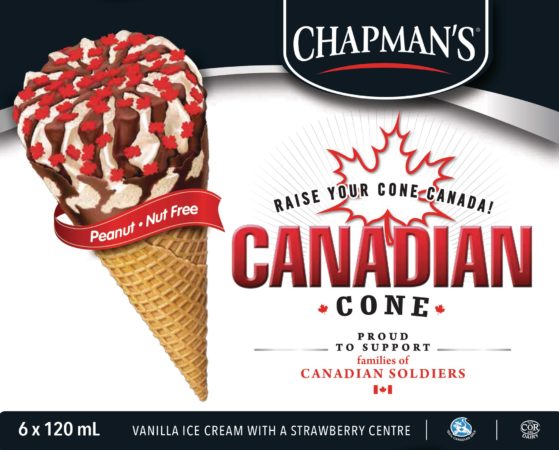 Beat the Heat with a Canadian Cone this Canada Day, in Support of Military Families #RaiseYourCone (CNW Group/Canadian Hero Fund) 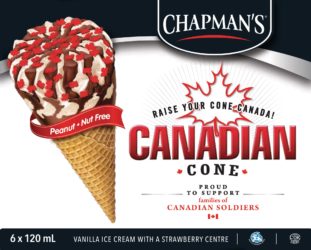 Beat the Heat with a Canadian Cone this Canada Day, in Support of Military Families #RaiseYourCone (CNW Group/Canadian Hero Fund)

Earlier in June, as a lead-up to Canada Day, the Canadian Hero Fund and Chapman’s Ice Cream launched their Raise Your Cone Campaign – a national initiative in support of Canadian military families.

The campaign centres on Chapman’s Canadian Cone, which features vanilla ice cream with a strawberry core, topped with red maple leafs. A portion of the proceeds from Canadian Cone sales will be donated to the Canadian Hero Fund in support of their scholarship program for Canadian military families.

In a press release, Chapman’s Ice Cream expressed excitement about giving Canadians an opportunity to make a difference in the lives of Canada’s military families. “We are proud to be Canadian!” says Penny Chapman, president of Chapman’s Ice Cream. “What a great way for family and friends to celebrate – raise your cone in support of the Canadian Hero Fund.”

The two organizations are hoping social media will be a driving force of the campaign, with Canadians from coast to coast being encouraged to share their support of Canadian military families using hashtags #RaiseYourCone and #CanadianCone on Instagram, Facebook and Twitter.

“This promises to be an exciting campaign and wouldn’t be possible without the generous support of a Canadian family owned company like Chapman’s Ice Cream,” says Tim Peters, president of the Canadian Hero Fund. “We hope all Canadians will join us in raising their cone this Canada Day.”

This is the first year of the national fundraising campaign, and according to the press release, both organizations hope to see the campaign become a yearly occurrence. To learn more visit www.chapmans.ca or www.herofund.ca.