At the annual meeting of the American Chemical Society, pure maple syrup was included among foods that show promise in protecting brain cells against Alzheimer's disease 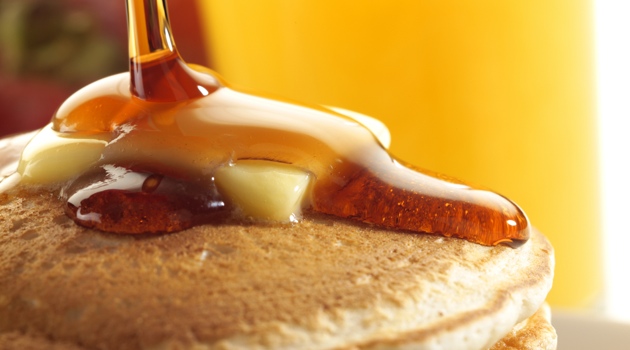 Maple syrup may be more than just a delicious pancake topping: it could also have important brain benefits, according to scientists.

At the annual meeting of the American Chemical Society, a group of international scientists shared results from 24 studies exploring the beneficial effects of natural products on the prevention of neurodegenerative diseases (particularly Alzheimer’s disease); and for the first time, pure maple syrup was included among foods that show promise in protecting brain cells against the kind of damage found in Alzheimer’s disease.

According to a media release from the Federation of Quebec Maple Syrup Producers, one study presented at the symposium by Dr. Donald Weaver of the the University of Toronto found that pure maple syrup extract may help prevent the misfolding and clumping of two types of proteins found in brain cells – beta amyloid and tau peptide. When cellular proteins fold improperly and clump together, they accumulate and form the plaque that is involved in the pathogenesis of Alzheimer’s and other brain diseases, according to the press release.

Other research presented at the symposium demonstrated that pure maple syrup extract prevented the fibrillation (tangling) of beta amyloid proteins and exerted neuroprotective effects in rodent’s microglial brain cells. Scientists have found that a decrease in microglial brain cell function is associated with Alzheimer’s disease and other neurological problems. The maple syrup extract also prolonged the lifespan of an Alzheimer’s roundworm model in vivo. The study was conducted at the University of Rhode Island, in collaboration with Texas State University, and was led by Dr. Navindra P. Seeram.

“Natural food products such as green tea, red wine, berries, curcumin and pomegranates continue to be studied for their potential benefits in combatting Alzheimer’s disease. And now, in preliminary laboratory-based Alzheimer’s disease studies, phenolic-enriched extracts of maple syrup from Canada showed neuroprotective effects, similar to resveratrol, a compound found in red wine,” says Dr. Seeram. “However, further animal and eventually human studies would be required to confirm these initial findings.”

Serge Beaulieu, president of the Federation of Quebec Maple Syrup Producers, says he is very excited by the findings of these independent scientific studies and enthusiastic about the potential pure maple syrup may have on brain health. “The Federation and the 7,300 Quebec maple enterprisers are committed to investing in scientific research to help better understand the link between food and health. This has been demonstrated by a robust and carefully guided research program that started in 2005 to explore the potential health benefits of pure maple syrup,” says Beaulieu. “We already know that maple has more than 100 bioactive compounds, some of which have anti-inflammatory properties.  Brain health is the latest topic of exploration and we look forward to learning more about the potential benefits that maple syrup might have in this area.”