Pig health starts in the pen

A study from the US Department of Agriculture looked at several different types of pens and how they affect pig health, growth and wellbeing 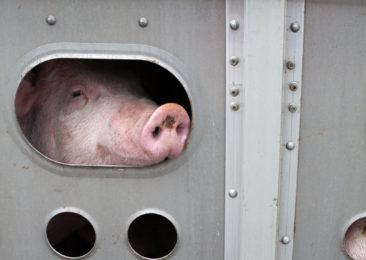 Washington, DC – The Agricultural Research Service (ARS) of the US Department of Agriculture has released findings from a recent study on pig pens.

In a statement, ARS scientists explain that “improving an animal’s environment can reduce stress, which in turn enhances wellbeing, growth and efficiency, and it decreases disease susceptibility.”

Scientists at the ARS’ Livestock Behavior Research Unit study the behaviour of livestock and how production factors affect the animals.

One of the animal scientists on the study was Jeremy Marchant-Forde, who looked at different types of pig pens.

The statement says pigs had access to various pens, such as “a standard pen with a metal floor (the control pen), one with a rubber mat on the floor, another with a mirror and a fourth with a view of another pig across the passageway.”

What the scientists discovered was that pigs preferred to be in a pen where they could see another pig. The statement says the pigs spent about 40 per cent of their time in those pens and “10, 20 and 30 per cent, respectively, in the control, mirror and mat pens.”

The statement goes onto explain that the scientists conducted a second experiment – this one with people. The scientists looked at which pens pigs preferred when a person was present.

“When a person was in sight,” says the statement, “pigs spent nearly 90 per cent of their time in either the pen with the mirror or where they could see another pig. Marchant-Forde hypothesizes that pigs saw their reflection in the mirror as a companion, but more research is needed for confirmation.”

For producers adding mirrors might not be an ideal solution, especially when there is more than one pig. But Marchant-Forde says producers could consider adding rubber mats to help improve pigs’ environment, “which may help reduce stress and promote health and productivity.”