The Ontario government has created a $4.9 million relief fund for small craft distillers and cideries. Spirits Canada says it's about time. 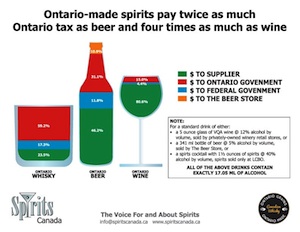 Toronto – Craft distillers and cideries will reap the benefits of a $4.9-million provincial relief program that will run over three years.

The province announced that it will give eligible cideries up to 74¢ per litre and eligible distillers up to $4.42 per litre on eligible sales up to a maximum of $220,000 per year per producer.

Spirits Canada welcomed the news. The program is a “tacit admission that taxes, levies and mark-ups on spirits in Ontario are excessive and a significant barrier to entry,” says Jan Westcott, president and CEO of Spirits Canada.

The province says the program will help the small distillers and cideries to grow their businesses, help them create jobs and boost economic growth across the province.

The province adds that this program builds on previously announced initiatives to support small cideries and spirits producers, such as permitting spirits manufacturers to have a bar or restaurant at each of their licensed manufacturing sites and launching the sale of cider in grocery stores.

Additionally, small spirits producers will soon be able to deliver directly to bars and restaurants, creating more exposure for their products.

Spirits Canada says the returns available to distillers on sales in Canada are amongst the very the lowest in the world and impose a very significant challenge to fund necessary industry investment in innovation, facility improvement, promotion and market development. Moreover, at less than a single authorized outlet per 10,000 adults, Ontario provides fewer retail point of sale for spirits than any province in Canada.