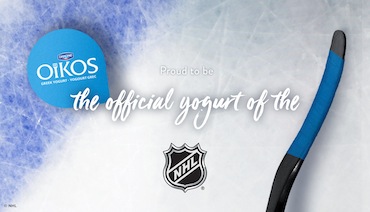 Boucherville, Que. – A well-known yogurt brand is now the official yogurt of the National Hockey League in Canada.

DanoneWave Canada announced in a statement that its OIKOS brand yogurt has sealed a three-year sponsorship of the NHL in Canada starting with the current 2017-2018 season.

Mélanie Robitaille, DanoneWave Canada’s Marketing director, says in the statement that the sponsorship deal matches a “dream snack” with a “dream sport.”

“This sponsorship takes OIKOS into a bold new territory, allowing us to leverage the NHL’s brand equity to introduce healthy snacking to new consumers, including men – a growing target for us,” says Robitaille.

The company says it will highlight the NHL sponsorship through a marketing and retail strategy.

OIKOS kicked off its sponsorship run on Dec. 16 with the 2017 Scotiabank NHL100 Classic. The event featured the Ottawa Senators versus the Montreal Canadiens in an outdoor game in Ottawa.