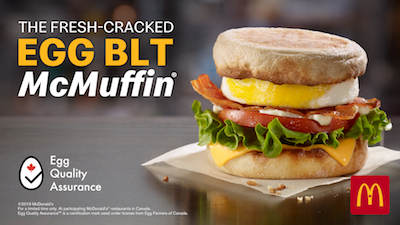 The McDonald’s advertisements will be the first time that most Canadians see the new EQA certification mark, which indicates that every Grade A large egg used in the sandwiches has met stringent animal care and food safety standards. The ads begin July 30 on television, print and digital channels until the beginning of September.

“The EQA program is the culmination of decades of work building world-class standards in the Canadian egg industry. Those standards are upheld through our national programs that include inspections and third-party audits,” said Roger Pelissero, third-generation egg farmer and chair of Egg Farmers of Canada in a press release.

All EQA certified eggs have met the highest standards of Egg Farmers of Canada’s national Start Clean-Stay Clean and Animal Care Programs, Pelissero told Food in Canada.   He said the EQA certification applies to every type of egg and egg product produced in Canada, and that the Egg Farmers of Canada have been working with companies and graders to brand their products as EQA-certified. McDonald’s Canada is the first national company to actively advertise the certification, which will help give it national exposure, he said.

Visit eggquality.ca to find out more about Egg Farmers of Canada’s EQA program.