Mars Canada has expanded its Newmarket, Ont.-based chocolate manufacturing facility to accommodate the manufacturing and packaging of the Maltesers brand. The expansion will create up to 30 new jobs 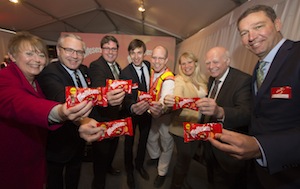 at the grand opening of the Mars Maltesers factory Newmarket, Ontario on Friday, March 10, 2017. (Photo by Peter Power)

Newmarket, Ont. – Mars Canada officially opened its expanded chocolate facility, so it can now accommodate the manufacturing and packaging of the iconic Maltesers brand of chocolate.

This is the first time Maltesers are being manufactured in North America.

The $70-million, 60,000-sq.-ft. expansion will create up to 30 new full-time, highly skilled jobs and significantly increase the company’s manufacturing capacity in Ontario to serve the North American market.

Maltesers produced at the Newmarket facility will be sold across Canada and the U.S. – where the product is being launched for the first time. The expansion adds to the company’s already significant presence in Ontario and will be a key pillar of growth for the Mars Canada chocolate business.

The sustainable and state-of-the-art facility brings together the best manufacturing, packaging and technology from Mars Incorporated’s global facilities. Operating at peak capacity, the facility will employ up to 150 employees.

Maltesers were first created in 1936 in England by Forrest Mars Sr. and first sold in 1937. Maltesers contain a crisp honeycombed centre covered in delicious chocolate.

In addition to Maltesers, Mars Chocolate currently produces the Mars, Milky Way and Musketeers brands at the same facility, which is nut-free.