A joint venture for cannabis company and greenhouse tomato grower 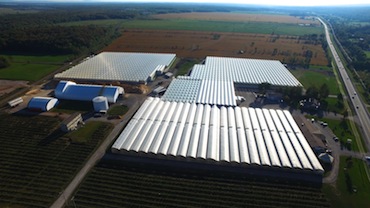 Mirabel, Que. – A cannabis and hemp company and a tomato greenhouse operator have partnered  to create a new joint venture.

The statement explains that Les Serres Stéphane Bertrand currently produces tomatoes and other vegetables in a 700,000-sq.-ft. modern greenhouse.

Under the terms of the agreement, the company will upgrade the entire greenhouse and retrofit it for cannabis production by April 2018.

Canopy Growth will provide assistance and guidance throughout the process.

Les Serres Stéphane Bertrand has produced tomatoes from the site and will “apply its farming expertise to cannabis production in order to grow organic cannabis flowers,” says the statement.

The new company expects to be ready to begin production by May 2018.

Also under the terms of the agreement, says the statement, the new company “will lease the 700,000-sq.-ft. greenhouse from Stéphane Bertrand.” The new company will have the option to acquire the property.

Canopy Growth says the venture will give it a larger presence in Quebec.

Les Serres Stéphane Bertrand is the “largest producer of pink tomatoes in North America,” says the statement, and the greenhouse holds a valid Ecocert organic certification.

For Canopy Growth, the new joint venture will be the first of its brands to carry organically produced cannabis.