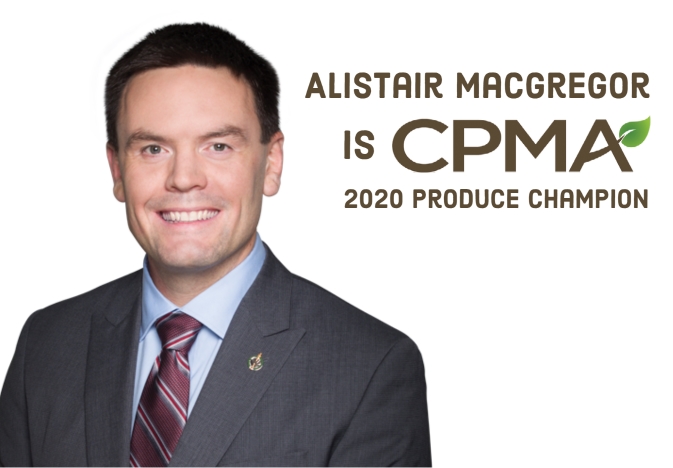 The Canadian Produce Marketing Association is proud to recognize its 2020 Produce Champion: Alistair MacGregor, Member of Parliament for Cowichan–Malahat–Langford and NDP Critic for Agriculture and Agri-food.

The CPMA’s annual Produce Champion award is given to a Member of Parliament or Senator who has been supportive of the produce industry and effective at bringing industry issues to the forefront on Parliament Hill.

In recognition of this award, MP MacGregor is featured on the October episode of CPMA’s podcast, Produce Talks, in conversation with CPMA President Ron Lemaire. The two discuss MacGregor’s work on the agriculture file and how the COVID-19 pandemic has changed things both on and off Parliament Hill. The 2020 Produce Champion will also be highlighted in a video shown at the upcoming 2021 CPMA Convention and Trade Show.
“Since his election in 2015, Alistair MacGregor has consistently shown incredible support for the Canadian fresh fruit and vegetable industry,” said Lemaire. “We are truly grateful for his engagement, and particularly for his advocacy on a range of issues, including the need for a financial protection mechanism for produce sellers, which continues to be a key priority for our members.”

“The fresh fruit and vegetable sector is an important part of my community in Cowichan–Malahat–Langford, and I know it is an integral part of communities across Canada,” said MP MacGregor. “I am honoured to be named 2020 Produce Champion and proud to advocate for a sector that contributes so much to Canada’s economy and food security, and to the health and wellbeing of Canadians from coast to coast to coast.”