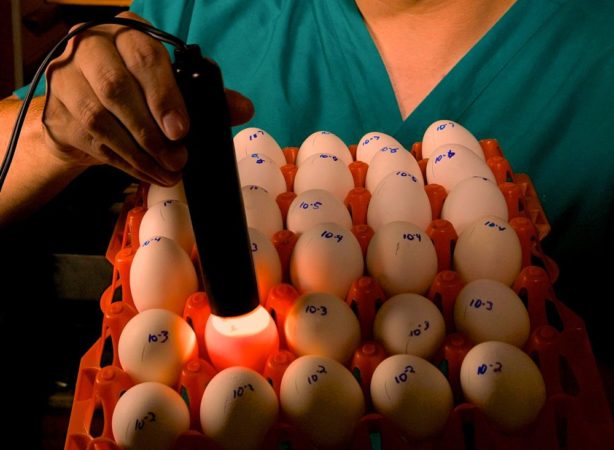 Commercialization of new technology that determines the gender of chicks before they are incubated is getting a $844,000 boost from Canadian Agricultural Adaptation Program (CAAP), Agriculture and Agri-Food Canada Minister Lawrence MacAulay has announced.

The funds will help Egg Farmers of Ontario test and develop a patented egg-scanning technology called the Hypereye at the pre-commercialization level, said EFO general manager Harry Pelissero in an interview.

Researchers at McGill University, with support from EFO, have developed a non-invasive egg gender identification technology that can also determine whether an egg is fertile before it has entered the incubator.

The innovation not only saves hatcheries the cost of incubating eggs that will never hatch or be used in the layer industry, it displaces the controversial practice of destroying live male chicks shortly after they hatch.

The Hypereye means that instead of newly hatched male chicks being gassed, asphyxiated or put through a grinder, they can be separated out before egg incubation starts and sold for commercial use in processing or table egg markets. That opens up a new revenue stream for roughly half of the eggs hatcheries produce.

As well, being able to remove infertile eggs from the incubation process improves incubation efficiency by approximately five per cent, he said.

“This is the Holy Grail for the layer industry,” Pelissero said, noting the technology promises improved efficiency for the broiler industry as well.

The technology, based on hyperspectral imaging, a process that detects minute bands of light, has been proven to work in the laboratory. The next step is developing the processes that make it effective with a high degree of accuracy scanning 20,000 eggs per hour, he said.

The patented process is attracting interest from around the world, Pelissero said. He is hoping the process of ramping up the ID system will be in place by mid-2019 with the first machinery brought to market by 2020.

“The Government of Canada is proud to support the Egg Farmers of Ontario for this first-of-its-kind study that will make Canada a world leader in animal welfare. This investment will help pilot a solution that will be welcomed both in Canada and around the world and will keep the egg industry strong and growing,” said MacAulay in a release.