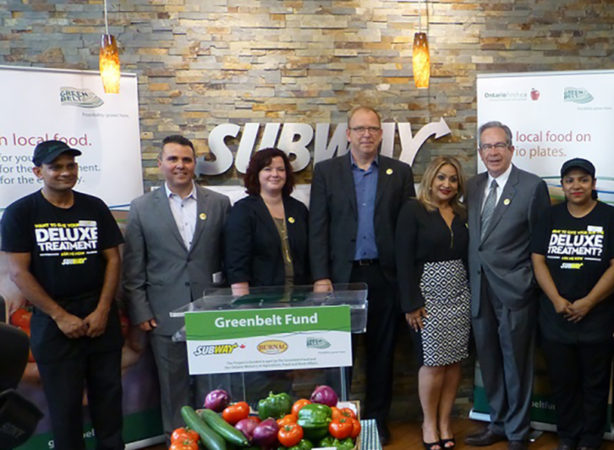 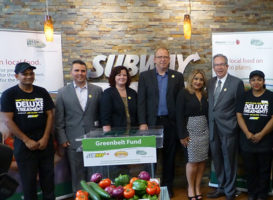 The Greenbelt Fund, in partnership with the Ontario Government, is providing Burnac Produce with $90,000 through the Local Food Investment Fund (LFIF) to go towards their “Stop at Subway for Ontario Grown” project. This project entails having Ontario-grown tomatoes, cucumbers, peppers, and onions available at SUBWAY restaurants during the harvest season.

“Burnac and SUBWAY Canada’s leadership to help increase Ontario food sales is just the type of change we look for at the Greenbelt Fund,” says Burkhard Mausberg, CEO of the Greenbelt Fund. “As the biggest restaurant chain in the world, SUBWAY Restaurants will be a leader in taking the local food movement to a whole new scale.”

Through the LFIF, the Greenbelt is investing over $730,000 to support ten projects in the Greater Golden Horseshoe region, bringing more locally grown and raised food to Ontarians. A total of $1.5 million in funding is being invested across the province.

“Through the Local Food Investment Fund, our government is helping expose people across this province to the great foods grown, harvested and made right here in Ontario while helping create new opportunities for our local agri-food producers,” says Minister of Agriculture, Food and Rural Affairs Jeff Leal. “With investments across the province, this funding is leveraging private-sector funding to provide the people of Ontario with more access to local food options while building a strong agri-food sector and growing our economy.”