A genetic library for beer

By Matt McIntosh for AgInnovation Ontario

Guelph, Ont. – The University of Guelph may soon house a vast new library. Not one of literature and large dusty tomes, though, but one focused on hops – a mainstay of beer making.

Spurred by the explosion of Canada’s craft beer industry, the University’s Department of Plant Agriculture has started a project to compile, save, and efficiently propagate important Canadian hop varieties.

According to Dr. Praveen Saxena, plant science professor and one of several researchers involved in the initiative, the purpose of the project is two-fold. 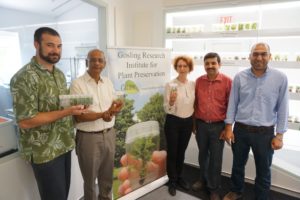 “There are many very unique and sometimes very rare hops that people have developed over a very long time, and they must be saved in order for people to access them,” says Saxena. “Most of what is needed now is imported from the United States and elsewhere, so keeping a library [at the University of Guelph] would also help reduce that. We want to produce uniform plants in large numbers when they are wanted,” he added.

Saxena and his colleagues Mukund Shukla, Elena Popova, and Max Jones are actually involved in several similar genetic library initiatives; the hop project, in fact, is derived from an older one focused on apple rootstocks.

Whether apples or hops, however, Saxena says the idea is the same – to create a genetic library capable of propagating high-quality crops on demand.

The library starts through collection in the lab when people bring in cultivars that they want saved and propagated. Saxena and his colleagues then produce clones of those cultivars by removing specific parts the plant and cultivating them in a completely sterile and meticulously controlled growing environment.

These clones, says Saxena, can then be preserved in liquid nitrogen “safely and pretty much forever,” and removed from freezing for use at any time.
Because the clones of these plants are produced in a completely closed lab environment, Saxena says it is possible to preserve traits exactly as originally desired. 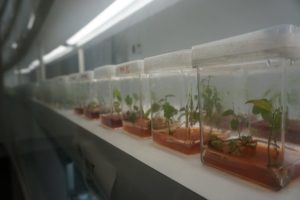 Having fewer uncontrolled factors, that is, should mean plants propagated from such clones would be of a more consistent genetic quality than those produced in a field setting – something which is very important for brewers looking to recreate a specific taste.

“We are still in the early stages of this project, but we have had success with other crops. We know we can use this process for all kinds of plants,” says Saxena. “Right now, it is simply a matter of fine tuning the process for hops.”

Once the process is fine-tuned, however, Canadian brewers and beer-enthusiasts may have access to a central, reliably consistent library of truly Canadian ingredients.

The project has received support from the University of Guelph – Ontario Ministry of Agriculture, Food and Rural Affairs Gryphon’s LAAIR (Leading to Accelerated Adoption of Innovative Research) program, as well as the Gosling Research Institute for Plant Preservation, another division of the University focused on preserving threatened, endangered, and economically important plants. Gryphon’s LAAIR is funded by Growing Forward 2, a federal-provincial-territorial initiative.