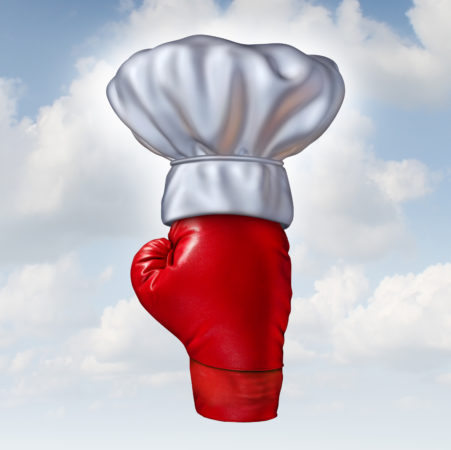 Food competition concept and top master chef symbol as a red boxing glove with a white kitchen cooking hat on a sky background as an icon for cook off and recipe contests.

Winnipeg – Several food entrepreneurs gathered at a specialty shop gearing up for a fight. A food fight, that is.

But not just any food fight. De Luca’s specialty grocery store was home to the Great Manitoba Food Fight in late September.

In a press release, the Manitoba government explains that the competition is “open to companies that have developed but not fully commercialized a new food or beverage product.” The Food Fight  is presented by De Luca’s and Food & Beverage Manitoba.

This year, four companies received awards to help them get their products out in the marketplace.

The release says the prize packages “will be tailored to each entrepreneurs’ needs and the expertise and resources needed to help move the product toward commercialization.”

Some of the services could include recipe refinement, package design, marketing, workshops, trade shows, business management, food processing, or safety and handling.

The Great Manitoba Food Fight is sponsored by the Manitoba government and Food & Beverage Manitoba in partnership with De Luca’s.