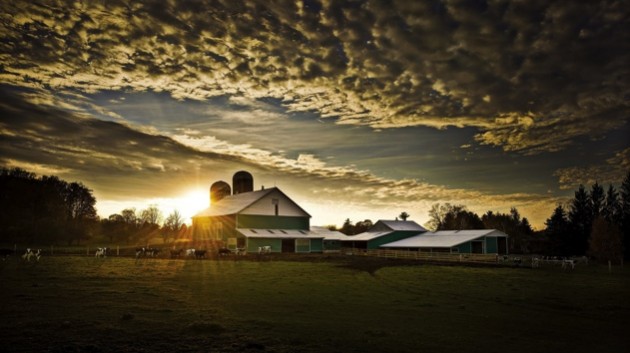 The Egger family farm, a member of the Gay Lea Foods Co-operative.

As 2016 begins, Farm Credit Canada (FCC) agriculture economists are offering up their best insights on the five most significant trends that could impact the Canadian agriculture in 2016.

“As economists, we like to challenge ourselves by collecting and analyzing the data to provide the best forecasts for producers to help with their long-term planning and decision-making,” says J.P. Gervais, FCC’s chief agricultural economist. “This can be challenging in a vibrant and dynamic Canadian agriculture industry, where consumer demand and export opportunities can have as much impact on farming as the weather.” Here are their five top trends, as described in a press release from FCC:

1. Weather patterns could cause supply disruptions and opportunities

There’s no question weather can create significant challenges or opportunities for Canadian agriculture.

Drought in Russia and the Ukraine, for example, could lower wheat production and have a positive impact on demand for Canadian wheat. El Nino – a phenomena where a large band of warm ocean water creates unusual weather conditions and disrupts growing seasons – is expected to lower palm production in Indonesia and Malaysia and chickpea production in India.

“Canadian pulses will be needed to shore up reduced supplies from India and low carry-over stocks. This will create strong demand and higher prices for Canadian pulse crops in 2016,” says Gervais, noting the United Nations coincidentally proclaimed 2016 as the International Year of Pulses.

“Our commodity outlooks rely heavily on what happens in other parts of the world, so it’s always good to keep an eye on weather systems that might disrupt or increase supplies of the same or alternative commodities,” he says.

Consumers are demanding more food choice, but are they willing to pay for it? That’s the question on the minds of many producers and food processors as they face growing pressure to meet complex and sometimes conflicting consumer demand. Consumer choice includes fresh or processed, healthy or indulgent, local or global – with affordability being a common thread.

“Canada has traditionally thrived producing safe, high-quality agriculture commodities, but producers are now facing the challenge of sorting through a number of mixed messages and changing food preferences,” says Gervais. “At the same time, producers face growing public concern about modern food production, while trying to produce food efficiently at a cost that consumers are willing to pay.”

Gervais said consumer demand for food diversity has created a trade deficit where imports of processed food exceed our exports (by $1.9 billion in 2010 to $3.5 billion in 2014). “As Canadian producers see more opportunities to grow a wider variety of food, we expect the trade deficit trend to slow and begin to shrink,” he says.

Don’t let your guard down, but low interest rates and a weak dollar will continue to contribute to favourable economic conditions for Canadian agriculture in 2016, according to Gervais.

“Interest rates should remain very low, perhaps with some slight upward pressure on fixed rates for three- and five-year mortgages,” says Gervais. “But the overall economic environment is expected to be favourable for farming operations, agribusinesses and food processors in 2016.”

Gervais said weak oil prices and a different outlook for interest rates between Canada and the United States will continue to put downward pressure on the Canadian dollar before it strengthens in the second half of the year.

4. Profits could be squeezed by growing supplies of some commodities

Agriculture commodity prices are expected to see an overall decrease in 2016, as there is an oversupply of some commodities and growing supplies for others. The low Canadian dollar, however, will help support profit margins for grain and oilseed producers, which may help offset any price decrease, Gervais said.

Gervais predicts the livestock industry will see mixed results in 2016. Cattle prices are expected to retreat, resulting in tighter profit margins for feedlots. Cow-calf operations are expected to remain profitable, yet face tighter margins than in previous years. Hog operation profits are projected to stay in line with the five-year average, benefiting from strong pork demand from China. Profits in the dairy sector may be vulnerable due to dairy ingredient imports and continued low world dairy prices.

“Lower feed costs are expected to support overall margins in the livestock sector and demand for beef is expected to increase – both domestically and globally – which is good news for producers,” says Gervais.

5. Canadian farm debt will continue to climb, but at a slower pace

Strong farm receipts over the past five years have led to increased investment in Canadian agriculture and higher farmland values. This will level out and sales of new farm equipment will likely see little improvement following overall slow sales in 2015. As a result the growth in farm debt is expected to slow, according to Gervais.

“Producers are re-evaluating their earning potential based on weaker commodity prices and their investment in farmland,” he says. “A weak Canadian dollar also makes farm inputs more expensive, so producers are placing a priority on streamlining their operations.”

“The good news is Canada’s net farm income has kept pace with farm debt over the past five years, which reflects a strong and vibrant agriculture industry,” says Gervais.