FCC Hopes to Drive Away Hunger 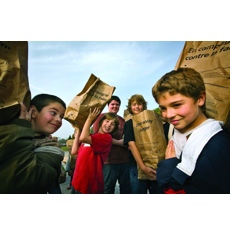 Throughout the program, which runs until mid-October, the FCC will visit Canadian communities with a tractor and trailer to collect food and cash donations for food banks across the country. The FCC is also donating $25,000 to Food Banks Canada to support its National Food Sharing System, in which food products donated from industry and consumers are distributed among member food banks throughout Canada.

The Drive Away Hunger tours take place this year the week of Oct. 11 in Alberta, Nova Scotia, Ontario, Quebec and Saskatchewan. The FCC will also be collecting food and cash donations at each of its field offices across the country from Sept. 30 to Oct. 15, as well as online at www.fccdriveawayhunger.ca. National Drive Away Hunger partners accounting firm BDO and feed and livestock producer New Life Mills will also be collecting donations at participating offices across Canada.