A University of Guelph study finds that neonicotinoids "could be having a devastating effect on wild bumblebees"; the pesticides are already a factor in bees' decline 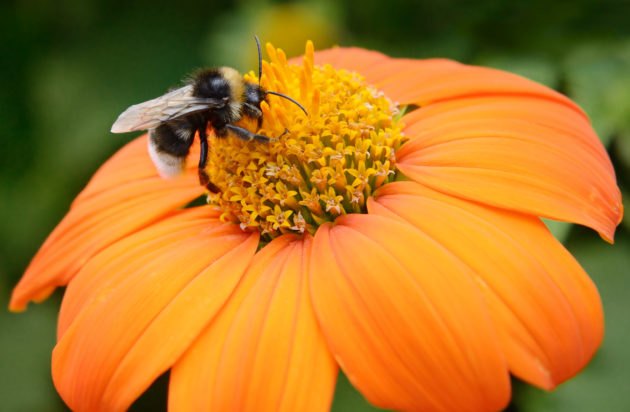 Guelph, Ont. – A new study from the University of Guelph has found that bumblebees exposed to neonicotinoids “were 26 per cent less likely to lay eggs to start a new colony.”

A report on the university’s website (“Neonics put Bumblebees at Risk of Extinction, study reveals,” by Deirdre Healey from Aug. 15, 2017), says professor Nigel Raine, holder of the Rebanks Family Chair in Pollinator Conservation, conducted the study with Gemma Baron, Vincent Jansen and Mark Brown from Royal Holloway University of London.

Raine says in the report that the 26 per cent reduction “significantly increases the chances that wild populations could go extinct.”

The report adds that “neonicotinoids are one of the factors contributing to the decline of bees and are currently being phased out or restricted in a number of countries including Canada.”

For the study, the researchers looked at what happens when a queen bumblebee is exposed to thiamethoxam, a common neonicotinoid pesticide, in the spring – “when they emerge from hibernation and are preparing to lay their first eggs and establish a colony.”

Spring queen bees are vital in growing the next generations of bumblebees.

The report says “the researchers exposed more than 300 queen bees to environmental stressors common in the field including parasite infections. Roughly half of the queen bees that successfully emerged from hibernation were then fed syrup treated with pesticide at levels similar to those found in wild pollen and nectar for two weeks.”

The researchers then watched and recorded the queen bees’ behaviour for 10 weeks.

Raine says in the report that “This study shows that neonicotinoids could be having a devastating effect on wild bumblebee populations. We urgently need to know more about how pesticides could be affecting other species to make informed decisions about the risks associated with using these chemicals.”

Related
Ontario announces task force on bee health
Pollinator loss “would be nothing short of catastrophic” says Environmental Commissioner
Bee losses in the U.S. aren’t as high this year, but still worrisome: Center for Food Safety