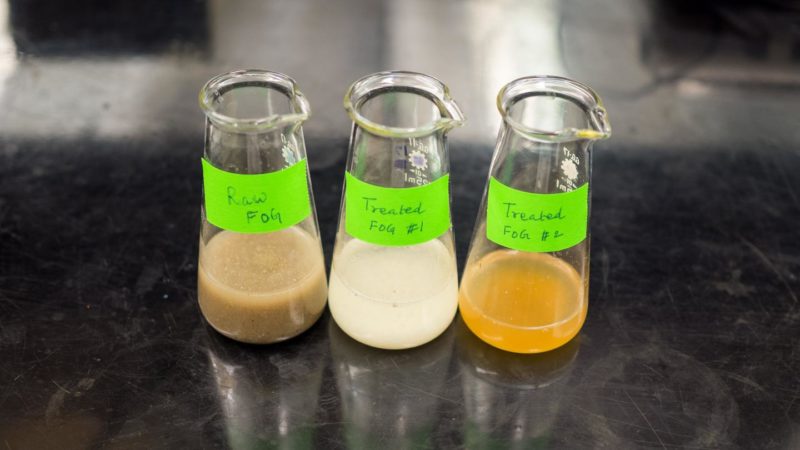 University of British Columbia researchers have developed a method for breaking down fats, oils and grease that clog pipes. UBC photo

Cooking oil and similar waste can clog pipes, harm fish and even grow into solid deposits like the “fatbergs” that recently blocked the sewage system in London, England.

University of British Columbia researchers may have found a way to treat these fats, oils and grease — collectively called FOG — and turn them into energy.

Researchers heated FOG samples to temperatures between 90 and 110 C and added hydrogen peroxide, a chemical that kickstarts the breakdown of organic matter. Researchers said the treatment dramatically reduced the volume of solids in the FOG by as much as 80 per cent. It also released fatty acids from the mixture that can be broken down by bacteria in the next stage of treatment.

“FOG is a terrific source of organic material that microorganisms can feed on to produce methane gas, which is a valuable, renewable energy source. But if it’s too rich in organics, bacteria can’t handle it and the process breaks down. By preheating it to the right temperature, we ensure that the FOG is ready for the final treatment and can make the maximum amount of methane,” says research associate Asha Srinivasan.

She added that the methods developed at UBC will enable farmers to load more FOG into their biogas digesters — the large tanks that treat farm wastes, including cow manure, to produce methane. “Farmers typically restrict FOG to less than 30 per cent of the overall feed. But now the FOG can be broken down into simpler forms, so you can use much more than that, up to 75 per cent of the overall feed. You would recycle more oil waste and produce more methane at the same time.”

Ultimately, the technology can be used in municipal FOG management programs, says lead researcher Victor Lo, emeritus professor of civil engineering at UBC. “The principle would be the same: you pretreat the FOG so it doesn’t clog the pipes, and add it to sewage sludge to produce methane from the mix,” said Lo.

“To the best of our knowledge, this type of pretreatment for FOG has not been studied before, although simple chemical methods do exist to break down FOG,” added Lo. “We’re hoping to do more research to find the optimal ratio of FOG to dairy manure so that they can be pretreated together.” 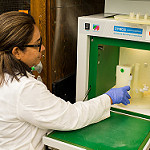 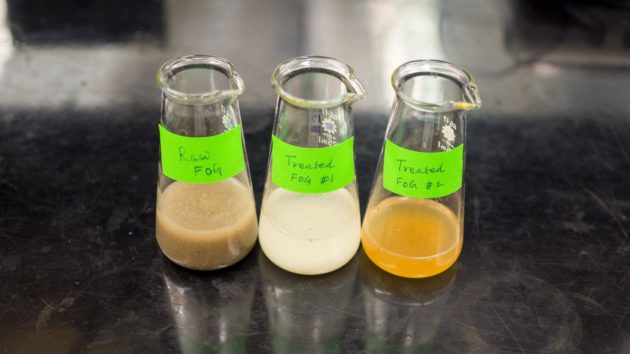