Competition brings out local twists and flavours in Mac & Cheese 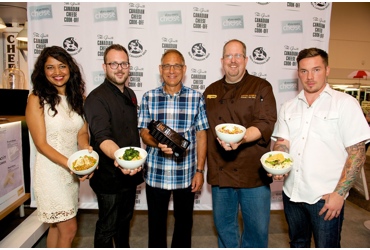 Toronto – What happens to a classic comfort food when you have four chefs, accomplished foodies and mix in a little competition?

You get several twists and delicious ideas.

The four chefs and foodies from across Canada took to the stage in an attempt to create the ultimate comfort food using Canadian cheese and pasta. And each contestant also mixed in a dollop of imagination.

The winning dish? It came from Andrew Farrell, a chef at 2 Doors Down in Halifax. His Crispy Greens Mac & Cheese packed a whole lot of Nova Scotia into one dish, with four cheeses from That Dutchman’s Farm – three Gouda and one Blue – all made in Upper Economy, N.S.

Cheesy noodles were then topped with a kale-broccoli-Brussel sprouts crust and Sriracha hot sauce for an added kick.

“The competition was as sharp as Canadian cheddar,” said Farrell. “All the dishes looked delectable and the crowd was really engaged. I am so thrilled my Crispy Greens Mac & Cheese, featuring three Goudas and Dragon’s Breath Blue cheese from That Dutchman’s Farm, won the hearts and taste buds of the judges.”

The Cook-Off was organized by Dairy Farmers of Canada to take Canada’s beloved mac & cheese to a whole new level and showcase the outstanding quality, variety, taste, and versatility of Canadian cheese made from 100% Canadian milk.