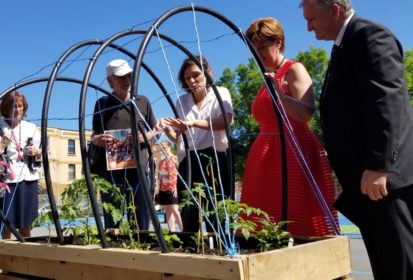 Federal programs to boost the profile of domestic and locally grown foods at home while reducing food waste, food insecurity and deceptive food marketing are all up for funding under the government’s new Food Policy for Canada.

Agriculture Minister Marie-Claude Bibeau and Parliamentary Ag Secretary Jean-Claude Poissant announced the new policy Monday June 17 in Montreal, following up on the allocation of $134.4 million over five years as pledged in the federal budget in March starting with the 2019-20 budget year.

Monday’s announcement offered up more specifics for one of the programs pledged in the budget: $50 million for a Local Food Infrastructure Fund, meant “to support a wide range of community-led projects that aim to improve access to safe, healthy and culturally diverse food.”

Eligible organizations are to be invited to submit applications in that fund’s first intake period, starting Aug. 15 this year, to seek non-repayable grants of up to $25,000.

Among four other five-year funding blocks set out in the March budget, the Food Policy also calls for $15 million for a Northern Isolated Community Initiatives Fund, backing “community-led” projects such as greenhouses, community freezers and skills training to “strengthen Indigenous food systems, and combat significant challenges in accessing healthy food in Canada’s North.”

Another $25 million will go to a Buy Canadian promotional campaign, promoting Canadian agricultural products by way of a new “Canada Brand” and supporting online and in-store “Buy Canadian” marketing campaigns to “increase consumer pride and confidence in Canadian food.”

Also, $26.3 million will go toward setting up a “challenge” to fund the “most innovative food waste reduction proposals in food processing, grocery retail and food service” and to back the federal government in projects to cut its own food waste.

Funding of $24.4 million will go to programs tackling “food fraud” such as the mislabeling and misrepresentation of food products. That funding, the government said, will help “protect consumers from deception and companies from unfair competition.”

Bibeau and Poissant on Monday also announced Ottawa, working with the provinces and not-for profit organizations, will move toward creating a new National School Food Program “to help improve the overall health of our children as they learn.”

Monday’s announcement also included plans for a Canadian Food Policy Advisory Council, an advisory body with “the expertise and diversity needed to sustain momentum and dialogue on food-related issues that matter to Canadians.” More information on that council is to be available “in the coming months.”

Letters of nomination for the new advisory council will be solicited from organizations across Canada, the government said, but added it will “likely include a diversity of members from the agriculture and food industry, health professionals, academia, non-profit organizations (and) Indigenous organizations, and will be open to provincial and territorial participation.”

Bibeau is to provide “final approval” of the members on the council, the government said.

The Food Policy’s development began in 2017 with consultations, in which “thousands of Canadians told us how meaningful the development of a collaborative federal food policy would be,” Poissant said Monday in a release.