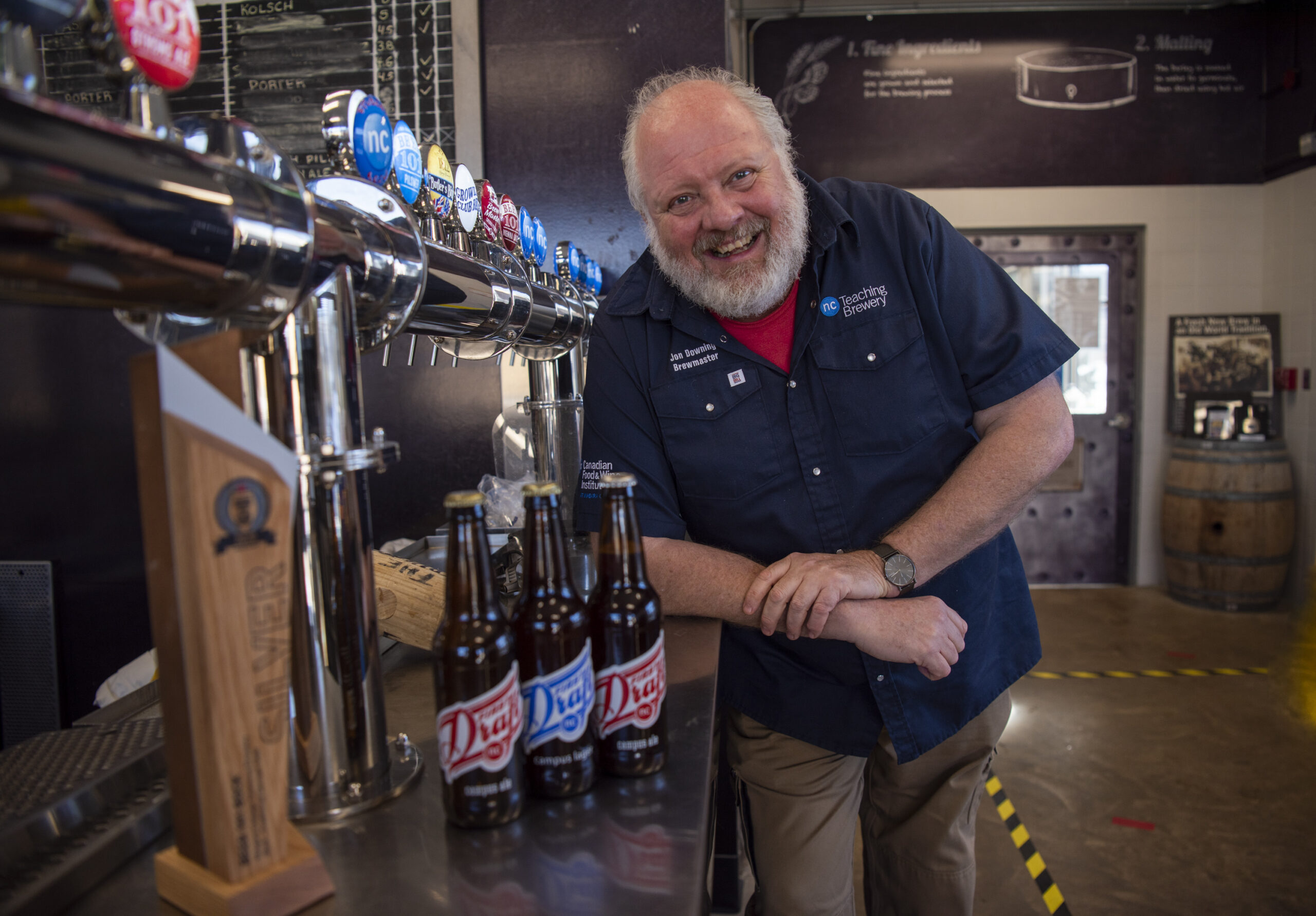 Staff and students at the Niagara College Teaching Brewery are clinking beer steins this week after three student-made beers medalled at the U.S. Open Beer Championships, including winning gold. The trio of beers that were awarded honours at the competition, which drew 6,000 entries from throughout North America, are:

Both the Beer 101 Bitter and Strong have consistently medalled at the U.S. Open Beer Championships over the past eight years. This is the third medal this year for the Beer 101 Bock, which also scored a gold at the Ontario Brewing Awards and silver at the Canadian Brewing Awards earlier this fall.

“This is a significant accomplishment for students and staff at the Niagara College Teaching Brewery,” said Steve Gill, general manager of NC’s Learning Enterprises. “Our beers have performed well at competitions this year, attesting to the quality of the applied education we offer at the college and to our students’ abilities to make some of the best beers in North America year after year.”

College Brewmaster Jon Downing noted that students in the Brewmaster and Brewery Operations program mastered the key characteristics judges seek when choosing winning beers in a competition. “Students are learning how to make consistent, high quality beer and they’re knocking it out of the park,” Downing said. “Quality and consistency are what the judges look for, and these beers have it. And with the Bock, we just nailed the recipe this year.”

The U.S. Open Beer Championships is the second-largest competition in North America and the only one to include suds from both professional and home brewers. Judges from the U.S. and Canada select winners in blind tastings, knowing only the categories, not the names or locations of beers competing.

Due to the COVID-19 pandemic, judging was held in both the U.S. and Canada. Competition Director Dow Scoggins said Niagara students don’t just perform well at the competition while enrolled in school. They continue to do so after graduation.
He noted NC alumnus Jared Lewinski, who’s now the head brewer at Listermann Brewing Company in Cincinnati, produced four beers that medalled this year, including a gold in the nut beer category.

Another alumnus, Henriques Soares, who came from Brazil to study in the program, saw two of his beers for Tire Shack Brewing Co. in Moncton, N.B., medal, including a gold in the Gose category. “One of the important things about Niagara College is the students do well there, but they also medal outside the College,” Scoggins said. “The No. 1 thing is we’re very big on clean beers with no alcohol taste. That speaks to the quality of brewing and the brewery at Niagara College.”

The award-winning beers are sold in 473-millilitre cans, which are available for purchase at the Wine Visitor + Education Centre, located at the College’s Daniel J. Patterson Campus in Niagara-on-the-Lake. Sales of the brews support student education.

NC’s Brewmaster and Brewery Operations Management program was launched in 2010 as the first of its kind in Canada. The award-winning, two-year program offers extensive hands-on training at an on-site, state-of-the-art Teaching Brewery to prepare students for employment in the expanding brewery, microbrewery and brewpub industries. Located at the College’s Daniel J. Patterson in Niagara-on-the-Lake, students learn from award-winning faculty and have access to on-site hop yard and local farm products to brew a full range of beer styles. Visit ncteachingbrewery.ca/

Ten years ago, just in time for the holiday season, Canada’s first class of Brewmaster students at Niagara College were just months into their studies when their first student-crafted beer was launched: First Draft Campus Ale. On December 6, 2010, St. Nicholas Day – as a nod to the patron saint of brewers– they tapped their first keg of First Draft. On December 10, they bottled it.

A decade and more than 1,600 different styles of beers later, NC’s trailblazing Brewmaster and Brewery Operations Management program has grown alongside the now booming craft beer industry in Ontario. Provincial, national and international awards continue to pour in for student-crafted brews from the College’s Teaching Brewery, also the first of its kind in the country, which has become a springboard for budding Canadian brewing talent and continues to raise the bar for the industry.

In June 2012, NC’s first class of Brewmaster graduates set forth as pioneers in what was then an emerging craft beer scene. Since then, class after class of students have been answering their ‘call to the bar’ and seeping into the industry – many as brewers and brewery owners who craft their own award-winning brews.

“There are few programs in the Ontario college system that got as much attention as the Brewmaster program did when it first launched in 2010,” said dean of NC’s Canadian Food and Wine Institute (CFWI) Craig Youdale. “It came at a time when the craft brewing industry in Ontario was just taking off, and the program was the perfect support for creating skills and knowledge in the expansion across the province.”

President of the Ontario Craft Brewers Association (OCBA) Scott Simmons congratulated the College on the 10th anniversary of the program and upcoming milestone for the Teaching Brewery, which opened in April 2011. The OCBA was a founding industry partner when program launched, and the partnership is still going strong to help craft brewers adapt to the ever-changing brewing scene. While there were less than 100 breweries in Ontario in 2010 – less than 40 of them still exist today – the number of breweries increased to more than 320 by 2019.

“The program has played a major role in growing the craft beer industry in Ontario, with graduates making their mark across the industry, including many launching their own breweries,” said Simmons. “We understood the importance of having this incredible resource in our own backyard to foster the growth of our industry in the province, and to help fulfil our vision of developing Ontario into a centre for brewing excellence. The continued success is a testament to the importance of this applied learning and program.”

Youdale noted that the CFWI takes pride in the growth, improvement and expansion of the program.

“The key to the success of the program is both consistency and constant improvement. Each and every year, the quality of beer created by the students continues to be world class and, at the same time, the entire team strives to bring new and innovative ways to support the learning in the classroom, science lab, and brewery,” said Youdale. “The amount of hands-on application the students get is unrivalled in our education system and that is the secret to their success.”

Brewmaster professor Jon Downing still has the first bottle of First Draft Ale from 2010. It’s still being produced, more recently, as Beer 101 Pale Ale – part of the popular series of 12 varieties of beers bearing the Beer 101 label. Students assist with these award-winning brands, and are responsible for producing 54 project brews, 54 target brews and other class projects each year.

Downing noted that the past decade has been “a wonderful ride” with 19 graduating classes, more than 360 graduates, and 74 current students. “It has been so much fun and hard work that would not have been possible without the dedication and diligence of all the students who wanted to succeed and thereby helped us to,” he said.

Aaron Spinney, who was among the first class of graduates, is now at the helm of Merit Brewing Co. in Hamilton. He noted that while being among the first to attempt anything is a great feeling, being a guiding light and beacon for others to follow is a great responsibility.

“The challenge is to never stop learning and improving one’s self all while welcoming others to the table, paving the way with smiles, safety, constant learning and growth through educated beers and science,” said Spinney. “It’s a great responsibility to carry the history and traditions of brewers past, yet rules are meant to be challenged. Without challenge, you cannot have innovation.”

A photo of the first class of Brewmaster graduates is displayed in Teaching Brewery as a reminder of their legacy for current students like Shane Wright. “People have been in this program for a decade now all over the industry, all over the world, not just Ontario,” said Wright. “You get to see the stuff they do and the breweries they opened and it’s really inspiring.”

Steve Gill, general manager of NC’s Learning Enterprises, is proud of the past decade’s accomplishments.

“When we first opened the Teaching Brewery, there was nowhere else in the country that postsecondary students could gain the hands-on brewing skills they need to succeed in the industry, and our Teaching Brewery continues to lead the way in Canada’s growing craft beer industry today,” said Gill. “Each beer brewed at our Teaching Brewery is a ‘resume in a bottle’ for our students, and the multitude of awards won for student-crafted brews is a testament to the quality applied education and training that our students bring into the industry in Ontario and beyond.”

NC’s Brewmaster and Brewery Operations Management program was launched in 2010 as the first of its kind in Canada. The award-winning, two-year program offers extensive hands-on training at an on-site, state-of-the-art Teaching Brewery to prepare students for employment in the expanding brewery, microbrewery and brewpub industries. Located at the College’s Daniel J. Patterson Campus in Niagara-on-the-Lake, students learn from award-winning faculty and have access to on-site hop yard and local farm products to brew a full range of beer styles. Visit ncteachingbrewery.ca/