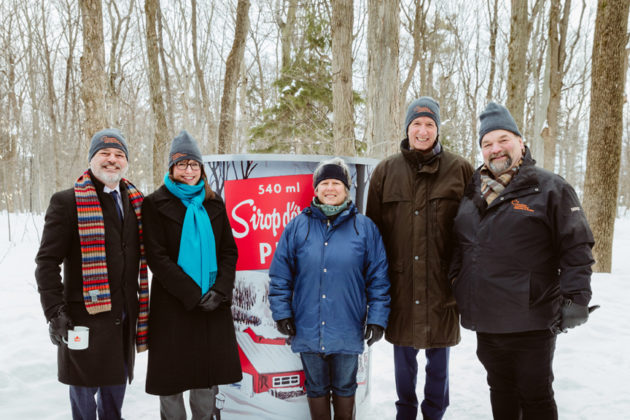 February, 24, 2020, Longueuil, Que. – Quebec’s maple syrup producers have published a book to mark the 100th anniversary of their industry.

The book, called Si l’érable m’était conté : 1920 – 2020, 100 ans d’acériculture au Québec, consists of 16 chapters interspersed with photos of maple-producing families that explain what it was like for maple producers in the 1920s and the collective action that led to the creation of the Quebec maple syrup production system.

The book tells the story of the passionate people who succeeded in making Quebec the world leader in maple production.

The book was launched recently at a tapping ceremony held recently in Bois-de-Coulonge Park in Quebec City to kick off the maple syrup producing season in the province.

Quebec Minister of Agriculture, Fisheries and Food André Lamontagne took part in the event along with a number of provincial MPs.

“Becoming a full-time maple syrup producer and making it your profession was almost impossible to imagine from the 1950s up to the 1980s,” Quebec Maple Syrup Producers (QMSP) president Serge Beaulieu said in a press release. “But now in 2020, maple syrup has become the main type of agricultural production in many regions in Quebec.”

He said that maple syrup production now supports 10,000 full-time jobs and brings in $600 million to the Quebec economy.

“The collective effort of the 11,300 maple syrup producers across the board has made it possible to create a stable environment in which the maple syrup industry can flourish. Our organization was born out of a desire shared by many to grow this once-ancillary production business into an economic sector in its own right.

“Our predecessors believed – and we still believe today – that when we all work together to move forward collectively, we get a lot further.”

Quebec accounts for 90 per cent of Canada’s maple syrup and 70 per cent of the world’s supply. The QMSP represents 7,400 businesses.

The book is available in French only. Price is $22. Click here to get a copy of the book.