University of Victoria plant biologist, Peter Constabel, and his team, discover that the salal berry is packed with antioxidants, making it stiff competition for other berries 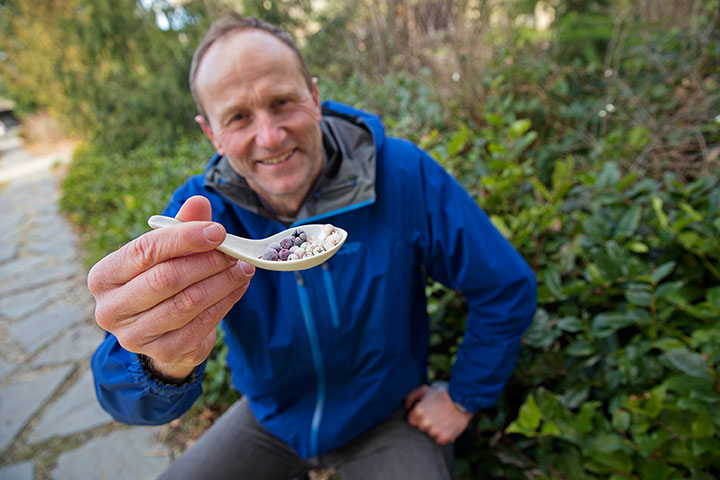 Victoria, B.C. – A plant biologist has found that a wild berry common to  Western coastal areas of North America is an antioxidant superstar.

Peter Constabel of the University of Victoria recently published research on the salal berry. The UVic News reports in an article that (“New research yields berry interesting results” from March 1, 2018 by Valerie Shore) the research shows the berry is competition for blueberries, cranberries and strawberries.

The article says salal berries are “packed with higher levels of health-promoting plant chemicals than most other berries out there.” And, “studies suggest that foods high in antioxidants have long-term benefits to human health, including a reduced risk of cancer, cardiovascular and neurodegenerative diseases, as well an anti-inflammatory effects.”

Constabel says in the article that salal berries aren’t part of most people’s diets, “but they were a staple traditional food for northwest coastal peoples, who mashed and dried them into cakes and fruit leather for winter use.”

The salal berry comes from a leathery-leaf shrub in the heather family that grows to about five feet in height, says the article. Flowers, which appear in the spring, are fuzzy white bells, and the berries ripen in late summer into “dull blue-black and are also slightly hairy.”

The flavour of the berries, says the article, will vary according to soil and sun conditions. But it tends to be “an earthy cross between blueberry and blackcurrant.”

Constabel, who studies how and why plants produce biologically active compounds, and his team “measured more than 50 ‘phytochemical’ compounds and antioxidant capacity over the course of salal fruit development.”

For more on the research or to read the article, click here.

Photo: Peter Constabel. Courtesy of the University of Victoria