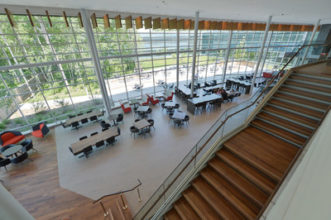 The $100-million, nearly-90,000-square-metre facility keeps Agropur’s decision-making centre in Quebec, according to an Agropur press release. Eventually, 800 employees will work at the new collaborative offices.

“We are proud to open our new head office here in Longueuil,” says Serge Riendeau, president of Agropur. “It represents a major investment and long-term commitment to Quebec, in keeping with our members’ vision of corporate sustainability. We have spent a total of $100 million on this project which includes our head office and a new laboratory; the head office complex also includes a distribution centre and Canada’s largest dairy R&D centre. Agropur, now the world’s 16th largest dairy processor by milk volume, has equipped itself with a modern head office that reflects its cooperative values.”

“With this move, Agropur Dairy Cooperative renews its commitment to Quebec and demonstrates that it is a driver of economic development,” adds Coallier, CEO of Agropur. “Agropur now has annual sales of almost $6 billion. The new head office is part of our organization’s transformation, which has included a string of recent mergers and acquisitions, major investments in our plants, a strong focus on R&D and improvements to our ways of doing things. Our new head office reflects our new stature and we are very proud of it. The businesses that will succeed in highly competitive global markets are those that are able to differentiate themselves through a culture of innovation. Having nearly 800 qualified employees working synergistically in high-tech facilities respectful of the environment is already having a visible impact on our organization’s performance. We are also confident that our new head office will help us attract and retain the best talent.”