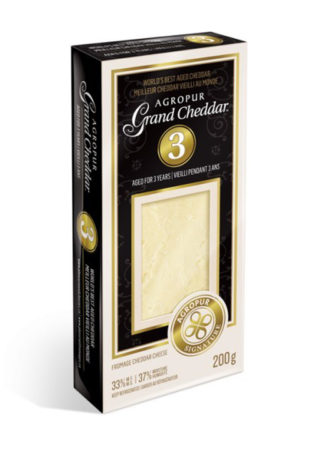 Agropur Grand Cheddar Aged 3 Years has been awarded the “Best Cheddar Aged Two Years or Longer” and made the list of the Top 20 cheeses in the competition across all categories. (CNW Group/Agropur)

Both cheeses are made at the company’s plant in Notre-Dame-du-Bon-Conseil, Que.

Agropur’s Grand Cheddar Aged 3 Years also made the list of the top 20 cheeses in the competition across all categories.

Agropur won a total of 13 awards at the 2020 edition of the major international cheese competition, including six gold.

Agropur also shone in the Mild Provolone category, sweeping the top three places with cheeses made at its plants in Luxemburg and Lake Norden in the United States. The jury was similarly impressed by the Smoked Provolone from Agropur’s Luxemburg plant, which took first and second place in its category.

Feta produced at Agropur’s Weyauwega, Wisconsin plant took home the top prize in the Feta category for the fourth consecutive time, while Fat-Free Feta from the same plant picked up the gold medal in the “Lowfat Cheeses” category.

The biennial contest is the world’s largest technical cheese competition. A jury of 55 experts recognized by the world’s top master cheesemakers assessed all technical aspects of cheeses from the best cheesemakers in 26 countries.

Agropur is a North American dairy industry leader founded in 1938. The Cooperative has 8,800 employees and 38 plants across North America, with sales of $7.3 billion in 2019.