A new chip off the old block

From apples to vegetables, the taste for innovation grows in Canada 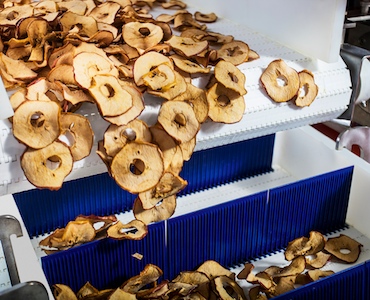 The struggle to get kids to eat their vegetables might become a little easier now. Imagine a fresh tasting crunchy vegetable chip, sliced and baked from locally grown sweet potatoes, carrots or tomatoes. This is the newest idea from Martin’s Family Fruit Farm in Waterloo, Ont., a major grower, packer and wholesaler of Ontario apples that employs 150 to 250 people depending on the season.

Martin’s business has 700 acres of apples in production and processing operations in Waterloo and Elmira, and it already makes apple crisps. Now, the company plans to slice and dry fresh vegetables in a way that turns them into healthy chips for consumers. Martin’s was recently awarded a $713,000 research and development grant from the federal government’s Agriculture and Agri-Food Canada innovation program to develop a new processing line for vegetable chips. The grant marks the second major investment in the company by the federal government in three years, as a $1.4 million loan was provided in 2012 to help create the apple crisp facility.

“It takes a lot of testing because every fruit and vegetable is different,” says Martin. “Even different varieties of the same apple will respond differently to the drying process. The sugar levels and the moisture levels are all different.”

Currently, Martin’s is experimenting with new machinery, new vegetable chip recipes and different drying techniques. If the success of their

apple crisp is any indication, the new venture will lead to an expansion of their Elmira plant.

“We’ve completed the initial testing and are getting good results with various vegetables,” says Martin, estimating that the new chips are at least a year away from the market shelves. “It takes time and investment,” he says. “The apple chip, for example, was approximately a three-year process from start to finish.”

Martin’s current processing line averages 2,400 lbs of dried product a day using a multi-stage AeroDry dryer from Bühler Aeroglide. From raw materials to the finished product, the apple crisps and the unique drying process behind them has been recognized extensively, recently featured on Canada’s “Food Factory” television show. The company is also exploring an expansion into American, Indian and Middle Eastern markets.

From the beginning, a simple idea for mass-production

Martin’s Family Fruit Farm had always been a labour of love in the heart of Ontario’s celebrated apple growing region. When the Martins decided to turn the fruit of their labour into a snack, Kevin Martin loaded up the back of his truck with boxes of apples and drove from Ontario to North Carolina.

Martin’s envisioned a healthy snack with the crunchy texture of a potato chip, free of the preservatives and added sugars commonly found in many snack food products. They wanted to use the air-drying process to naturally remove as much moisture as possible to create a product as healthy tasting as a natural apple. “We wanted to package what nature has given us in a healthy way,” says Martin. “It had to taste as fresh as the handpicked apples from our orchards.”

Martin’s knew the colour and texture they wanted to achieve, but they needed to define the method for drying. They would also need the processing technology that would bring the product to fruition. Bühler Aeroglide food engineers carefully considered the requirements. Apples are known to present characteristic browning after they are sliced, and some food processors add sulfites to inhibit the browning reaction. Martin’s wanted their new product to be all-natural with no additives, with a particular crunchy texture.

processing knowledge and confidential design and testing Martin’s needed. Engineers started by performing a variety of tests to address browning. Keeping the apples as lightly coloured as possible would make the most appealing apple. They blanched sliced apples with water and found the apples released their own sugars and pectin. This made the pieces stick together. They also tried to stop the browning with ascorbic acid. Then, they experimented with heating the apples as soon as they were sliced, at a high temperature. They soon discovered that the best option for neutralizing the browning reaction would be high temperatures.

After addressing the browning challenge, the task focused on designing a drying process for the apple chip, and multiple drying stages were needed. Key variables included thickness of the apples, time to dry and temperature set points. Experiments started with cored apples sliced in different ways, some with the peel on and some without. The thinnest apple wheels dried faster and remained crisper. They also held the most fruit flavour. Next, they tested the thickness of the layer. If the chips were piled too deep, they would stick together. If they weren’t piled high enough, the process wouldn’t be economically feasible. Another challenge was determining when to reorient the product without breakage, as well as how much heat to apply initially and for how long. Airflow and temperature adjustments were made and when the product reached a leathery stage, it was time to turn the apples and decrease the temperature.

“We tested many varieties from our orchards, experimenting with drying time at different stages, depths, and thickness,” recalls Martin. “Then, we’d check the results and make adjustments by shortening the length of drying time and increasing the thickness of the bed.”

They tested Crispin, Empire, Idared, Red Delicious, and Golden Delicious apples, and each variety reacted differently to the variables with changing colours and textures. They waited for the apples to develop a fluffy texture with curling edges, which meant it was time to cool. Then, the final test was conducted by dropping the apple wheel onto the lab floor. When an apple wheel finally broke apart, Martin knew the process had achieved the product characteristics he wanted.

Every possible variable was measured in order to maximize the capacity of the projected dryer. This included product shrinkage, product bulk density, retention times, temperature and product load. “When dehydrating a vegetable or a fruit, we process five to six times the mass we want to obtain for the final product,” explains De Tuoni. “For example, to obtain 50 lbs of dried apples, a customer would need to process approximately 250 to 300 lbs of fresh apples. All of this was considered to size the heating source and exhaust fans that would support a processing plan based on the lab measurements.”

In the end, Martin’s Crispy Apple Chips reflected the perfect blend of innovation and product excellence. Bühler Aeroglide created a drying process that met the customer’s requirements, and a multi-stage AeroDry conveyor dryer was manufactured for the processing site. Since then, the company has incorporated new slicing equipment and seasoning equipment that can add flavouring. Chocolate drizzled apple chips and cinnamon flavoured apple chips are two of the newest products. After crispy apple chips exit the dryer, they’re directed to a flavouring process line. This process introduces a “slurry” (a particular seasoning mixed with water) which gets sprayed onto the chips. Then, the chips go through another dryer to remove the moisture that was added from the slurry. From there, the chips proceed to packaging.

Martin’s Family Fruit Farm plans to use the new seasoning equipment to develop its new vegetable varieties. Still, there’s a lot of work to be done before the vegetable chips hit the market, including the fine tuning of drying techniques – each vegetable requires a unique process – and focus group testing to ensure the new products will be a hit with consumers.

“Receiving our newest grant will allow us to pursue these new food innovations and help us to be sustainable,” says Martin. “We also want to continue to grow partnerships with the agriculture community, and this new venture will enable us to continue to invest in agriculture.”

Martin’s Crispy Apple Chips can be found in Costco stores in Ontario as well as Loblaw Superstores and Starbucks across Canada.