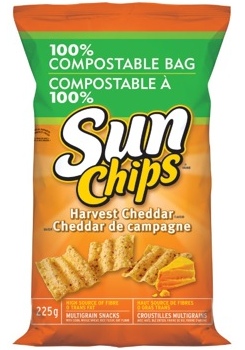 Frito-Lay Canada has announced that its SunChips brand, the company’s line of multigrain snacks, will introduce the first 100 per cent compostable chip bag. Starting this March, SunChips packaging will be made from more than 90 per cent renewable, plant-based materials.

The new package will completely break down into compost in a hot, active compost pile in approximately 14 weeks.

Frito-Lay’s packaging is currently made of multiple layers of polyolefin materials – mainly polyethylene and polypropylene – which are derived from petroleum by-products.

The renewable material used to produce the 100-per-cent compostable bag is made from plant-based polylactic acid or Polylactide (PLA). It’s produced by NatureWorks LLC.

And since the new packaging is made with plants that grow annually instead of petroleum, which takes millions of years to form, the impact on greenhouse gases is much lower.

Frito-Lay says it took four years of research and field trials before it found a material that met its performance expectations.

In addition to the 100-per-cent compostable bag, Frito-Lay Canada has:

• reduced its manufacturing fuel consumption by more than 20% since 1999 per kilogram of snacks produced;

• reduced its water consumption by 30% since 1999, saving 5.4 billion litres of water through changes in the manufacturing plants;

• diverted more than 92% of manufacturing waste from landfills into re-use streams in 2009; and