A research partnership will help producers reduce their feed costs 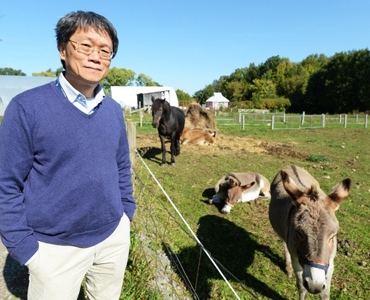 Montreal, Que. – An animal health company and Concordia University’s Centre for Structural and Functional Genomics (CSFG) are partnering up to make feed for livestock go further.

Elanco Animal Health, a division of the global pharmaceutical firm Eli Lilly and Company, partnered up with the university to develop new enzyme

combinations for pork and poultry producers.

The university explains that appeasing the appetite of livestock doesn’t come cheap.

In fact, feed can eat up some 70 per cent of the cost of producing the pork and poultry we consume in Canada.

Yet as much as one quarter of that feed doesn’t actually do much, because the animals lack the enzymes that would allows them to digest it.

Delivering those enzymes is big business, amounting to $800 million a year globally – a number that is expected to grow steadily, by up to seven or eight per cent annually.

CSFG and Elanco Animal Health have received $6 million over three years in funding. The funding is part of Genome Canada’s Genomic Applications Partnership Program (GAPP). GAPP partners academic researchers with industry to translate innovations that are expected to have a considerable economic and social impact in the near future.

The Concordia-Elanco project will begin by screening proprietary enzymes for the digestibility of common ingredients found in Canadian pork and poultry feed.

Image courtesy of Apolonia at FreeDigitalPhotos.net

The goal is to create commercial products specially suited for the diverse Canadian feed market.

These products are expected to bring about significant improvements in feed conversion and improve producer profit margins.

The project also aims to help the global food chain deliver a safe, affordable food supply, which is critical as the world’s population continues to grow.

“Globally, 600 million tons of grain are used for swine and poultry feed each year, which take up more than 60 million hectares of valuable farmland,” says Adrian Tsang, director of CSFG.

“Our goal with this project is to reduce strain on the environment due to decreased animal waste, and to improve overall animal growth and health.”