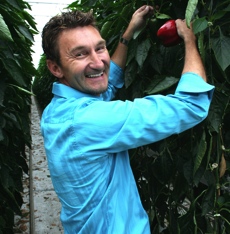 Peter Quiring, founder and president of Leamington, Ont.-based Nature Fresh Farms, hopes other producers will follow his lead and consider donating a portion of their fruits and vegetables to the hungry.

Nature Fresh Farms, one of the province’s largest greenhouse bell pepper producers, is donating half a million pounds of peppers this year to Hamilton Food Share through a Hamilton, Ont. organization called Turning Point. Once fully established, the initiative will be Canada’s largest fresh fruits and vegetables donation program. Fresh produce is often in high demand at food banks.

Because of the size of the donation, Hamilton Food Share, which distributes food through a network of community-based organizations, is working with the Ontario Association of Food Banks (OAFB) to help people in need across Ontario.

Quiring believes that tax changes may encourage other fresh produce producers to participate in the initiative, and suggests options such as tax credits to help offset the cost of the program. “There is the potential for redirecting up to ten million pounds of fresh produce to the hungry, but there needs to be a tax credit to help cover some of our farm costs,” he says.