Toronto – The province of Ontario announced the winners of the Premier’s Awards for Agri-Food Innovation Excellence.

In 2008, when rent at Monforte Dairy’s existing location skyrocketed, the artisanal cheesemaker faced the challenge of securing enough money to build a new facility. So Monforte turned to its biggest believers – its customers.

It sold shares in denominations of $200, $500 and $1,000, redeemable in cheese. While many farmers have turned to community-supported agriculture to finance their operations, this is the first time the model had been attempted by an Ontario food processor.

Monforte customers came through, purchasing nearly 900 shares totalling more than $400,000. The money helped pay for a parcel of land in Stratford and a brand new, environmentally sustainable cheesemaking plant.

This year, Monforte is on target to reach $2 million in sales.

Left to right: Marisa and Len Crispino of The Foreign Affair, and Kathleen Wynne, premier and minister of Agriculture and Food.

• The Foreign Affair Winery of Vineland, Ont. for re-engineering air flows to the vineyard to apply an Italian method of wine-making to Ontario-grown grapes:

As a Canadian living in Italy, Len Crispino fell in love with the appassimento wines that are a specialty of northern Italy, made by drying the grapes before pressing them.

He and his wife Marisa turned that passion into The Foreign Affair Winery. Despite differences in soil, growing seasons and grape varieties, after many years of experimenting, they have successfully applied appassimento techniques to Ontario grown grapes on their 40-acre Niagara vineyard.

To overcome the challenge of mould, they re-engineered air flow in the vineyard and production process. Today, The Foreign Affair Winery produces 14 different wines.

The Leaders in Innovation Award winners are:

When the nights get cooler, the leaves start to turn and apples weigh down the branches in orchards across the province, the Geissbergers’ mobile cider mill hits the road.

The first of its kind in Ontario, this cider press on wheels travels to the apples, rather than the other way round. With top-of-the-line technology and computerized pressing equipment, the customized trailer can process 500 litres of cider an hour.

And because the Geissbergers use bag-in-box packaging that keeps the cider fresh for a full year, growers can press all their apples at the peak of their flavour, rather than storing some for later processing.

When you’ve got 20,000 trees in your maple sugar bush, monitoring the tap lines is no small task. Doug Thompson was getting a little tired of trudging along each line, looking for damage in the plastic tubing. So he teamed up with a computer programmer to develop a wireless remote monitoring system that reports the status of each line to his computer or smartphone every few minutes.

The new “Tap Track” system has increased Thompson’s income, boosted production and slashed the number of staff repairing lines from five to two. Because the system targets problems, leaks can be fixed faster. That reduces the risk of bacteria, yeast and moulds getting into the sap and compromising its quality.

Left to right: Cathy, Paula, Joe and Bryan Gilvesy of YU Ranch, and Kathleen Wynne, premier and minister of Agriculture and Food.

When Y U Ranch delivers its grass-fed beef to hungry customers, it’s making North American history. That’s because the customized delivery van is the first hybrid gas/electric refrigerated minivan on the continent.

Y U’s owners, Bryan and Cathy Gilvesy, call it the “Farmers’ Market Express.” Small enough that anyone with an ordinary class G licence can drive it, the van is easy to manoeuvre in crowded urban settings. At just eight litres per hundred kilometres, its fuel efficiency exceeds every other model on the market. Not only that, the electric-powered cooler and freezer units can run when the engine is switched off, eliminating the need to idle. 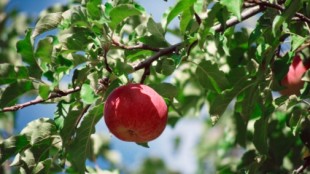