One in three workers plans to quit

TORONTO—The majority of Canadians are either planning to quit their jobs or just don’t care about them anymore, according to a new study by Mercer, a Toronto-based consulting firm.

It found 36 per cent of workers are seriously considering leaving their jobs right now—a 26 per cent increase from 2006.

Another 22 per cent may not be sure about quitting, but feel increasingly less committed and motivated at work. They’re also growing more dissatisfied with their bosses.

Younger employees were the most likely to have itchy feet, but the desire to flee was prevalent across all age groups, geographies and sectors.

“Diminished respect for and lack of confidence in an organization can undermine the innovation and productivity gains businesses rely on,” Avedon said.

Cutbacks due to the recession could be to blame for the high level of discontent.

Employees said pay was the most important part of their employment deal, yet just 53 per cent were satisfied with their salary.

A good retirement plan was second on their list, but 40 per cent said employers weren’t doing enough to help them in that area. One-third of Canadians lacked confidence about being retirement-ready.

Only 53 per cent said their benefits were as good as others in their industry.

There were, however, some improvements from 2006, including the number of workers reporting that promotions were being handed out fairly and that management was doing a good job retaining the most talented people.

More workers also said they’d had a formal performance appraisal or review in the past year, which had a direct link to whether they perceived opportunities to grow within the company.

Those are the kinds of measures that can boost worker engagement, says Pete Foley, principal at Mercer and employee research consultant.

“Employers must periodically take the pulse of their own employees to identify specific areas of concern and link employee opinion to outcomes such as productivity and retention,” Foley says.

That way, management can make informed decisions about investments and trade-offs in the employee relationship, he adds.

Other important elements for employee engagement included having ready access to information, enough authority to be effective at their job, and proper work-life balance. 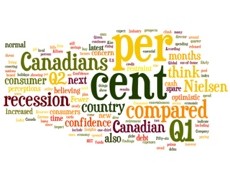 Canadian consumers optimistic about the economy