The Global Agricultural Information Network’s latest report finds that as Canadian dairy requirements are on the rise, milk production will follow suit

In its latest GAIN Report, it says that the dairy industry is on target to produce 8.45 MMT in 2012.

And with dairy requirements from the dairy processing industry on the rise, the industry is forecast to increase fluid milk production to 8.50 MMT in 2013.

The estimate for total cheese production in 2012 is 304 TMT, which represents a four per cent increase from year 2011 levels of 292 TMT.

In 2013, Cheddar cheese production is expected to remain near 2012 levels due to sustained demand countered by strong stocks.

Total butter production in 2012 is expected to increase to 93 TMT from 2011 levels of 87 TMT due to increased industrial use and a replenishing of stocks that were low during the two years previous when production was lagging behind the quota.

Butter production in 2013 is forecast slightly lower than 2012 levels due to strong stocks.

The estimate for skim milk powder production for 2012 is 86 TMT, up 13 per cent from 2011, and is reflective of the strong increase in butter production in 2012.

Non-fat dried milk production is forecast to ease to 82 TMT in 2013.

In 2011, Canadian dairy exports were valued at approximately $252 million, while imports amounted to $669 million.

The main products exported by Canada in 2011 were ice cream and edible ice products, cheese (mainly specialty), and whey. These represent 23 per cent, 16 per cent and 16 per cent, respectively, share of total exports.

Total cheese exports (excluding cream and fresh cheeses) are estimated to reach 9,000 MT in 2012 and are forecast to remain near the same level in 2013.

Consumers purchased 1.26 million kL of milk and cream and other fun stats 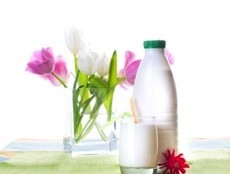