Major issues in Canada landing at the kitchen table

Ottawa – Food is not just about sustenance. The lack of food, and the choices consumers make when it comes to food are just two big issues that are transforming relationships with food, says a new report.

The report finds that food is at the centre of many of Canada’s most pressing issues. And in order to deal with those issues, communities need to make those connections so Canadians and communities can do something about them.

“Our most challenging problems are landing at kitchen tables across Canada. Food is the intersection point, the place where we all feel the impact of these big issues in a very personal way,” says Ian Bird, president of CFC.

Bird adds that Canadians are driving change and changing our relationship with food. Examples include community food centres, farmers’ markets, healthier snacks in schools and restaurateurs with 100-mile menus. “But we need to see the whole picture to have the impact we want,” he says.

The CFC released the report as part of its national Vital Signs program and calls food a defining issue for the century ahead.

Some of the key findings from the report include:

• Fighting the symptoms isn’t working. The principal cause of hunger is poverty. For 30 years communities have been responding to hunger with food banks and other strategies, but food bank usage shows no signs of slowing down. In fact it’s 31% higher than it was before the downturn in 2008. Combine this with food prices that are rising at nearly twice the rate of the Consumer Price Index and it’s clear that this problem won’t be solved with food donations alone.

• Our choices are hurting our health. There are now more obese people than undernourished people in the world. In Canada, more than three in five adults are overweight or obese. Type 2 diabetes is also one of the fastest growing diseases in Canada.

• And taking a toll on our environment. Feeding the world’s population has led to massive changes in agriculture over the past century. The practices we’ve developed to build a more efficient food system – monoculture farming, irrigation systems, pesticide and herbicide use, long-distance transportation to worldwide markets – are having a major impact on our environment. Greenhouse gas emissions directly related to animal and crop production alone accounted for 8.1% of total 2009 emissions for Canada, an increase of 20% since 1990.

• First nations are hit hardest. In Nunavut, 57% of children live in food insecure homes. Residents spend 25% of their total expenditures on food – while the rest of Canada spends about 11%. And Aboriginal peoples have three to five times the risk of developing Type 2 diabetes than other Canadians.

• Canadians are driving change. Canada’s organic sector has experienced double-digit annual growth in production and retail sales over the past decade. Farmers’ markets are reporting more than $1 billion in annual sales. Young farmer enterprises are performing better than other farms in Canada. The signs are all around us: Canadians are taking local food matters into their own hands. How can we build on the momentum?

• Canada has the potential to be a leader on the world stage. We are the sixth-largest exporter and importer of agriculture and agri-food products in the world. Relative to other countries, we enjoy some of the lowest food costs in the world. Our “food movement” is gaining momentum rapidly – making the timing perfect for greater collaboration and impact.

The CFC is also launching its 3Things4Food program. The organization is challenging Canadians to do three things for food and start a broader conversation about food in communities that is not just focused on hunger. 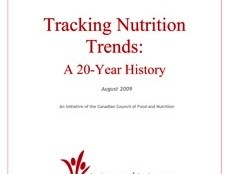