Montreal – Canada’s oldest beer brewery has inaugurated a new can line at its Montreal brewery.

Molson Coors invested $52 million to equip the site with expanded can production capacity.

The company says the investment has provided for the addition of a 355-mL and 473-mL can line, and 250-mL can production capacity. The brewery also modernized its two bottling and kegging lines.

The investment is the largest made at the Montreal site in more than 25 years.

The enhancements and upgrades will enable Molson Coors to repatriate can production volume destined for the Quebec market, while ensuring the competitiveness of its facilities in Montreal.

The additional can production capacity will also allow for the production, exclusively in Montreal, of the new Coors Light Iced T, due to launch across Canada in April.

Additionally, the setup of the new can line will make it possible to more rapidly achieve the company’s water and energy reduction targets.

Molson Coors says that by the end of 2012 it aims to reduce its water use by 15 per cent.

In fact, the can line alone means the company will save 8.4 million litres of water in the coming year, the equivalent of sixteen Olympic-size pools of water.

Brewing of two Molson brands to move to the U.S. 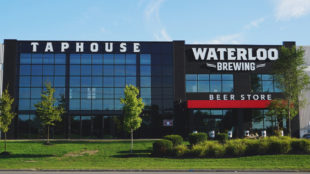